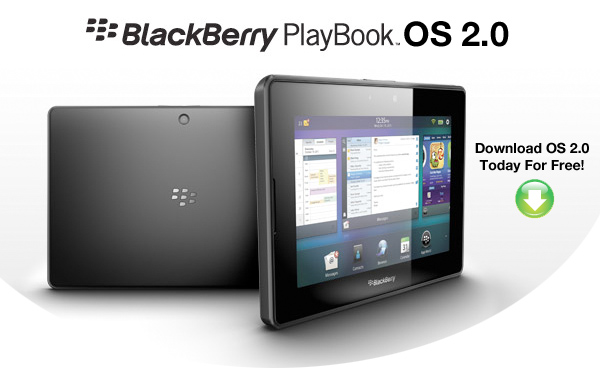 FINALLY!! After what's been a Long Road to BlackBerry PlayBook OS 2.0, it's finally here and available for download! If you own a BlackBerry PlayBook, just go to Settings > Software Updates > Check for Updates and you should find PlayBook OS 2.0 available for wireless download. Follow the instructions on screen for the easy installation process. When a new PlayBook OS update becomes available it sometimes takes a little while for it be accessible by all users, so if you check and it's not there just yet, have patience. It will be there soon. We promise.

BlackBerry PlayBoook OS 2.0 is a MAJOR software update to the operating system of Research In Motion's first tablet, and it brings with it a ton of upgrades that owners have been waiting for. In addition to a revamped homescreen experience, native email, calendar and contacts along with social service integration (Facebook, Twitter, LinkedIn) are onboard. Behind the scenes, the introduction of the Android App Player in OS 2.0 will broaden the selection of apps available via BlackBerry App World. And for those who own a BlackBerry Smartphone, combined with an update to the BlackBerry Bridge app you'll unleash some useful and fun functionality, like the ability to use your phone's keyboard to enter text on the PlayBook or use your phone as a remote control for your tablet.

PlayBook OS 2 offers a ton of other feature enhancements as well, and we'll bringing them all to you here on CrackBerry this weeek and beyond. We have a ton of great coverage planned, so you'll want to be visiting often. In the meantime, get that software update going and be sure to jump into CrackBerry's BlackBerry PlayBook forums, the hub for BlackBerry PlayBook owners worldwide!