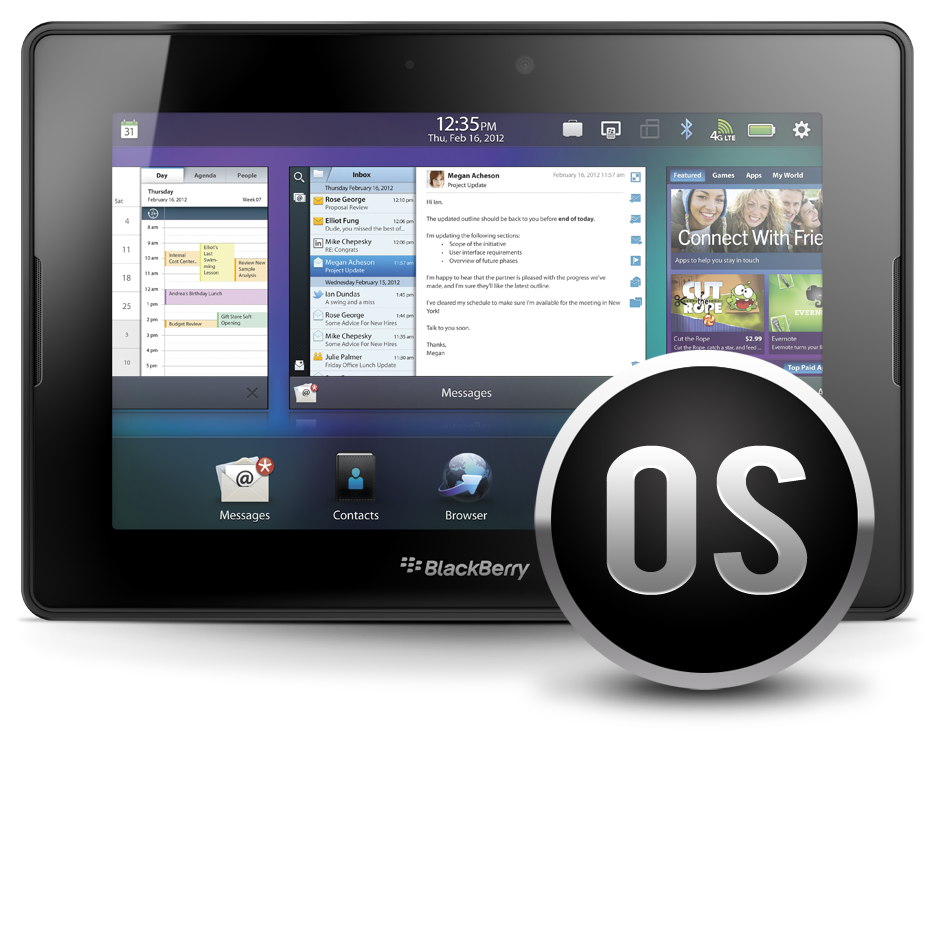 The BlackBerry PlayBook has today received an OS update to v2.1.0.1088. While not a huge update from the previous version, this release does provide a hotfix for those who experienced a loss of local contacts and calendars. While the fix won't bring back what was lost, it has been implemented to prevent the same thing from happening in the future.  Of course, this update is for the WiFi...

By now, most people who own a BlackBerry PlayBook will have received the notification on their tablet to go ahead and update to OS 2.1.0.1032. The latest OS offers a broad range of changes but to the average user, not all of them are instantly obvious. Luckily, between the information offered up by RIM and the folks in the CrackBerry Forums who have been picking apart the OS like there...

Hands on with the new Android Player in PlayBook OS 2.1

Apps now run in their own window!

Now, is the time folks. If you've been impatiently waiting for the latest BlackBerry PlayBook OS to arrive, v2.1.0.1032 has now finally landed after a very lengthy beta process and is ready to be downloaded. With this release there is plenty of changes to be found including but not limited to: Updated BlackBerry Bridge: Now you can view, respond and compose new SMS messages on their...

Does this BlackBerry PlayBook OS 2.1 and Bridge 2.1 Overview document indicate the update is coming soon?

BlackBerry PlayBook owners are quite anxious to get the OS 2.1 update, and rumors have been flying about when, exactly, we can expect to see it become available. Some documentation surfaced online (and then was quickly pulled) in the form of a PDF titled BlackBerry Bridge App 2.1 and BlackBerry PlayBook Tablet 2.1 Security Technical Overview. While much of the information contained in...

BlackBerry PlayBook OS 2.1.0.982 suggested to be arriving tomorrow along with BlackBerry Bridge 2.1 [Updated]

*UPDATE* - As noted previously, RIM has a habit of switching dates at the last minute and this release seems to be once again placed on hold for the time being for whatever reason. Back to playing the waiting game. Sorry folks! For BlackBerry PlayBook owners, it's been a bit of a wait for OS 2.1 to arrive. It has been rumored to be arriving for quite some time now but that day never...

If you're riding the beta train of BlackBerry PlayBook OS', you'll be happy to know that OS 2.1.0.840 is now available. This is a beta release and meant for developers only, and as such will most likely have a good amount of bugs. If you haven't installed a PlayBook beta OS before, we suggest you steer clear and just wait for an official release. If you're a developer or just want to...

Earlier this week we put up a post letting you all know RIM was planning to release the latest developer beta for the BlackBerry PlayBook pushing the OS into v2.1.0.560 and now, the update has gone live for those waiting. RIM has included quite a few changes with this release, some of which I'm sure they left off the change log noted on the developer blog: Improved HTML5 support...

If you’ve been around CrackBerry since the launch of PlayBook OS 2.0 then you’ve probably heard a few complaints about the amount of time it takes for the native PIM apps to open on the PlayBook. While we wait for Research In Motion to release an update that will speed up the launching of apps, a developer has gone ahead and made an app to help those of you that just can't stand waiting...

If you've been holding out and waiting for another BlackBerry PlayBook OS update - today is your day. The PlayBook software has been updated to version 2.0.1.358. A few updates and fixes to go along with this one including some welcomed enhancements. Browser enhancements to address performance with some websites Improvements to support Android apps Optimizations to...

PlayBook OS 2.0 quick tip: Closing folders with a swipe of the finger

While RIM rolled out PlayBook OS 2.0 to our beloved tablet some time ago, we're still uncovering some hidden features, and today I've uncovered a neat lesser known feature. If you're like me you have meticulously placed all your applications into respective folders, sorting them from "HD Games" to "entertainment". While it keeps everything organized getting in and out of a folder could...

Dear Berry: How do I save emailed photos on my BlackBerry PlayBook?

Hello again dear readers. It's time once again to open up the mailbag and clear up any BlackBerry woes you may have. This week's question comes from one of our Twitter followers, Scott, who asked: How do I save an attached photo (not bridged, but native Gmail) on PlayBook? Doesn't offer save/cut/copy…Holding a finger is NOT coming up with choices when it's attached. I can open but...