RIM's Founder and Co-CEO Mike Lazaridis was on hand today at the Adobe Air Max conference, where he showed off the BlackBerry PlayBook LIVE on stage. We caught some of the screen caps from the livestream (see below) and we've got a partial video of the demo above (thanks bizbuzz3). Hopefully we'll have even more video soon. All I can say is WOW. Based on the DevCon hype we've had high expectations for the PlayBook and what the new BlackBerry Tablet OS will be able to deliver, and based on this demo it's looking like the end product is going to be SWEET. The full flash support and REAL multi-tasking seriously makes the iPad/iOS operating system look more like a kid's toy. It was pretty awesome to see Lazaridis start playing a full screen video, then minimize it back to the homescreen and watch it still keep playing while moving around the homescreen.

BIG NEWS too... RIM is taking apps seriously here, with Lazaridis announcing that developers who submit PlayBook apps and get them approved into App World will get a FREE BlackBerry PlayBook. OHHH BABY!!! Heck, back stage, even Martha Stewart said she loved the PlayBook. Check out the photos below and stay tuned for more! 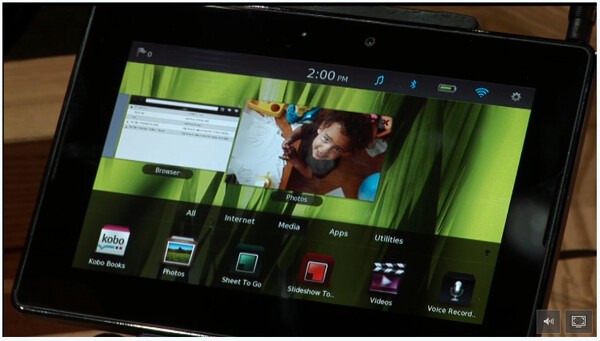