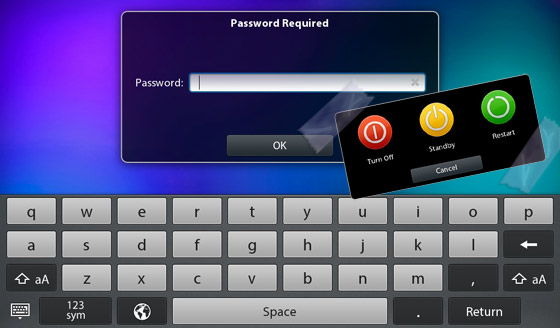 Research In Motion, can I ask a favor of you? You know those Charging Enhancements you added to the BlackBerry PlayBook's OS back in June?  You know, the enhancements where you tap the battery icon in the status ribbon to get quick access to Shut Down, Stand by, and Restart. Can you add those to the PlayBook's lock screen?

I keep my PlayBook locked down with a password; I also charge my PlayBook next to my bed. What does this have to do with anything? At night, when the day is done and all is quiet, I plug in my BlackBerry tablet to charge. This immediately lights up the screen. asking for a password.  I also have a knack for accidently touching the screen and waking the tablet, with the same result. In order to get the tablet to darken (so I can get to sleep), I have to enter my multi-character password just so I can get to the home screen to use those Charging Enhancements to put the tablet in Stand By.

Sure, pressing the power button on the top will put the PlayBook to sleep, but the power button isn't exactly easy to use. And if the PlayBook is in a case (like mine usually is), you can forget about it. Honestly, it's easier to go through the rigmarole of entering my password than it is to use that power button. If there were software buttons on the screen, I could quickly tap one of those and be done with the situation. I'd even be happy if just the Stand By button were there.

The PlayBook is a totally touch-based tablet. Everything the hardware keys can do, the OS can do (better). Except for on the lock screen. I know I'm probably asking a lot, but won't you at least consider it?  Okay, I love you, bye-bye! Anybody else with me on this?