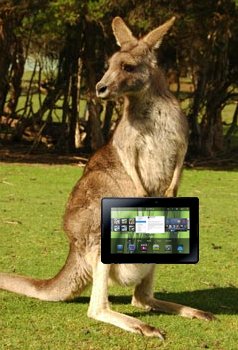 The news broke earlier that the BlackBerry PlayBook is coming to an additional 16 markets within the next 30 days - including Australia, but if you are at a loss for details on the tablet's upcoming debut in Down Under, read on.

When is the big day, you ask? June 20th. Be sure to mark that in your calendar, Australia - and while you're at it, also note down that the BlackBerry PlayBook will launch through all of Australia's major mobile carriers as well as retailer Harvey Norman. So, any CrackBerry readers from Down Under planning to buy the BlackBerry PlayBook? Let us know in the comments!