An overview of the OEM charging solutions available for the BlackBerry PlayBook, including the PlayBook Travel Charger, PlayBook Charging Pod and PlayBook Rapid Charger.

The BlackBerry PlayBook may not come with a removable battery, but for Research In Motion's first tablet they have made available three charging solutions that give users plenty of choice as to how they can re-charge their PlayBook. Each has its own benefits and disadvantages, and we'll be following up with more in-depth reviews of each individually (a long with a chance to win one of each charger too!), but in the meantime wanted to do up a quick video with a high level look at the different BlackBerry PlayBook Chargers. Watch the video above for the hands-on, and keep on reading for some more insight. 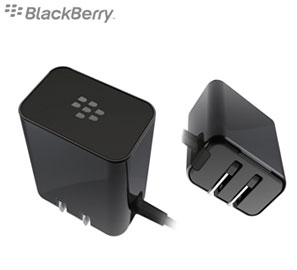 This is the charger that ships with the PlayBook in the box. The great thing about this charger is that it's small and utilizes the microUSB charging connector. In addition to charging your PlayBook, you can actually use it as a rapid charger on your BlackBerry Smartphone or on other microUSB phones you may own (it's rated at 300mAh input, 5 volts at 1.8A output vs. the 200mAh input / 5 volts. 750ma output on a standard BlackBerry Smartphone charger). While a lot of other tablets on the market are using proprietary connectors on their tablets, it's great to see RIM maintain this MicroUSB standard and cross compatiblity function.

On BlackBerry Smartphones the OEM charging pod is always a must-have accessory, and it's the same thing with the BlackBerry PlayBook Charging pod. Rated at 600mAh input and 12 volt, 2amp output, it'll charge up a PlayBook about twice as fast as the standard travel charger (around 2.5 hours from a completely dead PlayBook to fully charged). The PlayBook Charging Pod holds the PlayBook at an ideal angle for viewing and video chatting and holds the tablet firm enough that you can easily swipe and use the PlayBook while its on the stand. The only downside to this one is that if you have your PlayBook protected in a case you're likely going to have to remove it to put it on the stand.

The BlackBerry PlayBook Travel Charger has an MSRP of $39.99 and the Rapid Charger and Charging Pod have MSRP's of $69.99, but you can get them all for less at ShopCrackBerry.com (Rapid Charger coming soon). Keep in mind all of these chargers have been in high demand, so if you want one it's best to get your order in sooner than later (if on back order it's still worth ordering so you're first in the queue for shipping - we have lots more PlayBook accessory inventory en route). Keep in mind free shipping is available on all orders of $50 or more (shipping within continental US) and in our Canada store as well.