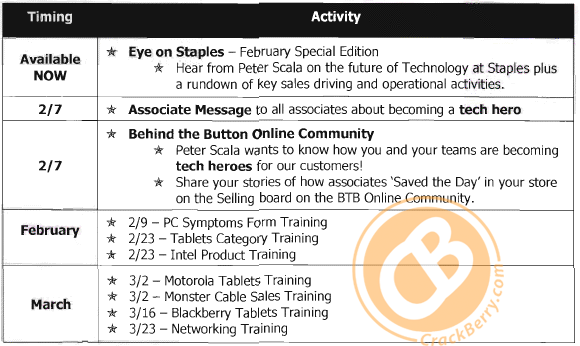 While Research In Motion has yet to give out the full details surrounding the BlackBerry PlayBook launch, we do know that they've been working with a multitude of different retailers in order to get the PlayBook in as many locations as possible. They've also made mention of the fact that BlackBerry PlayBook will not just be a carrier released item and that you'll be able to pick it up in some non-traditional areas.

With that in mind we're now hearing that Staples may be one of those "non-traditional" places as employees have been put on notice for some BlackBerry PlayBook training in March. It's been suggested that Staples is looking to ditch their netbook selections and be gearing up to a stronger focus on the tablet market with the BlackBerry PlayBook being their first real go at it. Rumor as it may be, we would not be surprised if and when it turns out to be true.