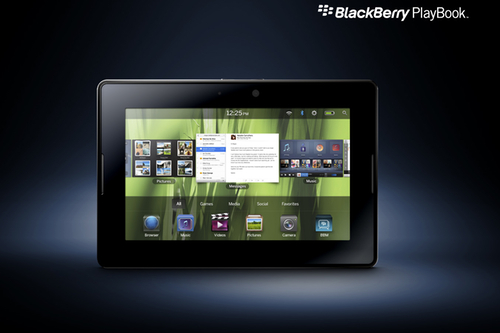 According to Bloomberg RIM's upcoming BlackBerry Playbook tablet will be available (at least in one model) for under $500. The device is rumored to land in North America sometime early next year in multiple versions including an 8gb, 16gb and 32gb models. At the time of the press announcement, RIM also made it clear that 3G/4G versions would be available at some point too (hopefully sooner than later!).

As it stands the 8gb model could come in under $500 -- maybe just at $499, or maybe even less -- but it would still serve as a great starting point for the new tablet. The higher models like the 64gb 3G/4G would obviously carry quite a higher price tag. In our BlackBerry Playbook price poll most users thought the device would be between $400-$500 and would be willing to pay somewhere in that range.

This news comes via Research In Motion's co-CEO Jim Balsillie who said recently "the device will be competitively priced" and may also be available through retails stores Target and Best Buy. RIM has always been about giving users choice in their BlackBerry Smartphones, so let's hope they follow through with this strategy on their tablets to have a tablet at just about every price point - from affordable to high end.