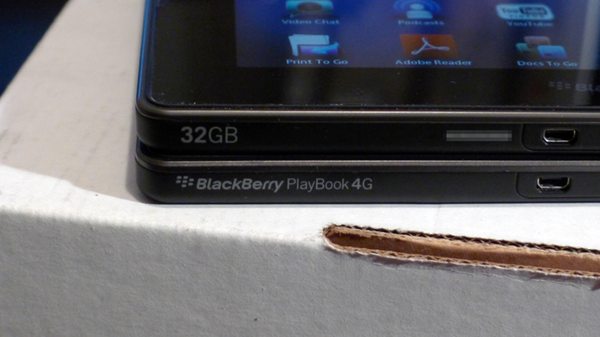 It's not exactly a secret that RIM has a BlackBerry PlayBook 4G the works, they were announced when the original PlayBook got announced but this, this is a weird situation that doesn't really turn out the best thus far. CrackBerry forums member thetaro describes the tale of purchasing his wife a PlayBook off eBay:

Long story short, my wife likes my Playbook 2.0 and I saw that someone was selling one that doesn't boot up on ebay, so I bought it. I was thinking I can easily restore the OS.

So I received it today, and it is the Playbook 4G Evaluation Unit. I believe the seller upgraded it to 2.0 and it bricked the playbook. The seller didn't mention about it being an evaluation unit and he sold it as is. So I don't think I can get my money back.

My major concern is that the unit could be a stolen unit and I may get into trouble. The playbook clearly says "Property of Research in Motion Limited" Evaluation Unit. Not for sale or lease."

Do you guys think I should contact RIM to see if they want it back?

We're sure RIM will eventually reach out to thetaro to get the unit back assuming it's a legit 4G unit but what a way to get the first glimpse of a 4G PlayBook. Hopefully RIM will hook thetaro up with some sort of PlayBook package to make up the difference. Legit or fake? Sound off in the comments.


Discuss in the CrackBerry Forums