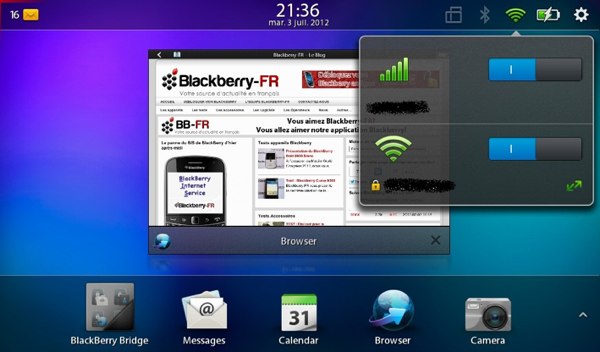 Although the BlackBerry PlayBook 4G has been spotted on several occasions now, the previous sightings of it never had the device looking as though it was complete and ready for launch. The most recent info, coming directly from RIM CEO Thorsten Heins tells us we'll soon see the BlackBerry PlayBook 4G for sale in the very near future. However, if that wasn't confirmation enough for you, both N4BB and BB FR have some initial hands - on impressions posted up from their time spent with the device.

Overall, the impressions are as you would expect. A BlackBerry PlayBook with 4G instead of being only WiFi but N4BB also reports the device is currently running on OS 2.0.1.354 and certainly feels a little bit faster compared to the current generation BlackBerry PlayBook. In addition to that, it's also noted there is no built-in BlackBerry Messenger present at this time so in order to make use of it you still have to bridge your BlackBerry.

At this point though, I only have one question about the device and that's "How much is it gonna cost?". We all know pricing is a huge factor in the tablet market and if RIM thinks they're going to move the PlayBook 4G at the cost of what they initially had the BlackBerry PlayBook priced at, they're wrong. It's just not going to happen these days.