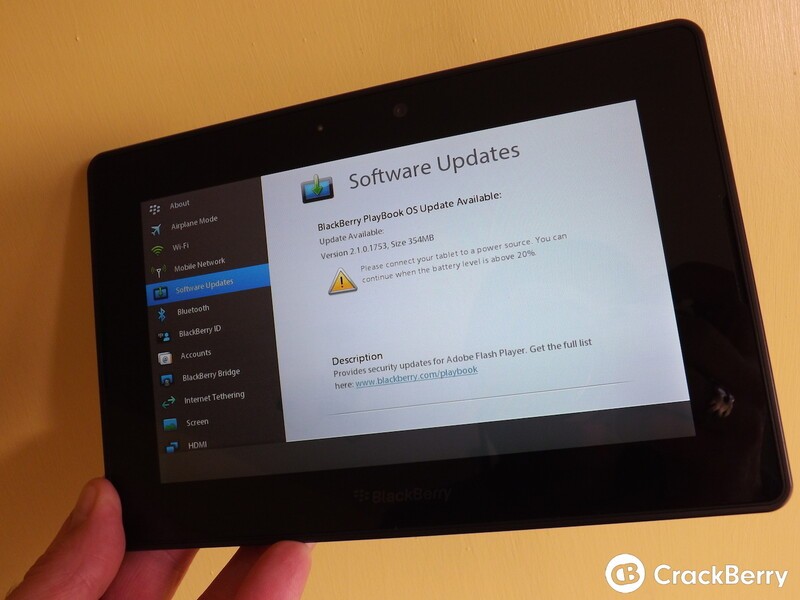 I've been a PlayBook user since day one, firstly on the Wi-Fi only version and then on the 3G+ when it arrived on UK shores. Unfortunately I had to ditch the 3G+ and go back to my original PlayBook due to software reasons. Once 2.1 was readily available, app developers started to release their games/apps with a minimum requirement of OS 2.1 which rendered my outdated 3G+ more or less useless and here's why....

OS 2.1 for the BlackBerry PlayBook has been with us for what seems an eternity, but could I get it on my 3G+? No, not until this week when it decided to show as available for some reason (version 2.1.0.1753). For well over a year now my 3G+ has been sitting in a draw and every month I take it out and manually look for a software update. And each month it goes back into the draw as no update shows for me.

My PlayBook 3G+ is network unlocked (supplied direct from BlackBerry) and while some of you that purchased the 3G+ may well have been able to somehow get OS 2.1 onto your tablet I wasn't, so this week as given me a rather pleasant surprise.

So, if like me you found your PlayBook 3G+ lacking behind in the software update department now may be a good time to dust it off and grab the update. I know that at some point BlackBerry will probably quit PlayBook support altogether, but even though this update is good news for me it also ties in nicely with the open letter to John Chen we recently published about BlackBerry 10 software updates.

At least I can now use my 3G+ as my main tablet if I choose to and use the apps that I want - something that frankly should have been available across the board without any device restrictions.

Rant over - I'm happy now. Are you a PlayBook 3G+ user who had the same issue as me? If it was only me that had the problem then I'll put the experience down to bad luck. Hit up the comments and let us know?