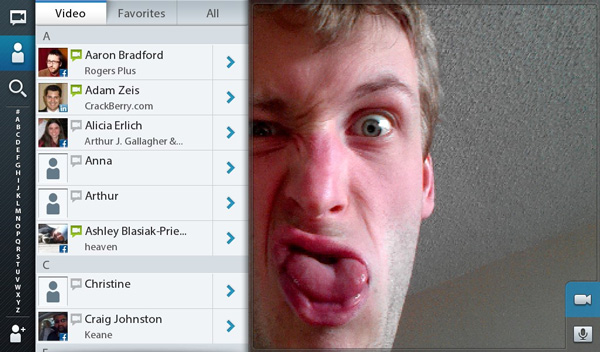 At CES we got to check out the updated video chat client on the BlackBerry PlayBook, and with today's launch of OS 2.0, everybody can get in on the action. It wouldn't be a stretch to say that this is the app that has seen the most dramatic change out of everything that's new. Now video chat contacts are pulled in from social networks that are registered on the tablet. Each friend also has online and offline status shown clearly, so you can know whether or not to even start calling in the first place. You can even edit the information for those contacts as you would in the new stand-alone native address book. Speaking of which, you can launch into video chat from the address book, too. There's also a new Presenter mode which lets you shunt a video call out to a larger screen over HDMI while flipping through other apps and notes on your PlayBook.

There are certainly some key use cases for video chat on the PlayBook. For example, moms who don't know much about technology, feel like they need a tablet, and have a kid studying abroad that already has a PlayBook. While I'm not convinced that video chat will be little more than a novelty, especially without hooks into external networks like Skype, it's great to see the existing service on the PlayBook improving. How often do you guys video chat? Who do you talk with? Is it worth RIM's while to invest in this area, or should they just get in bed with Skype?