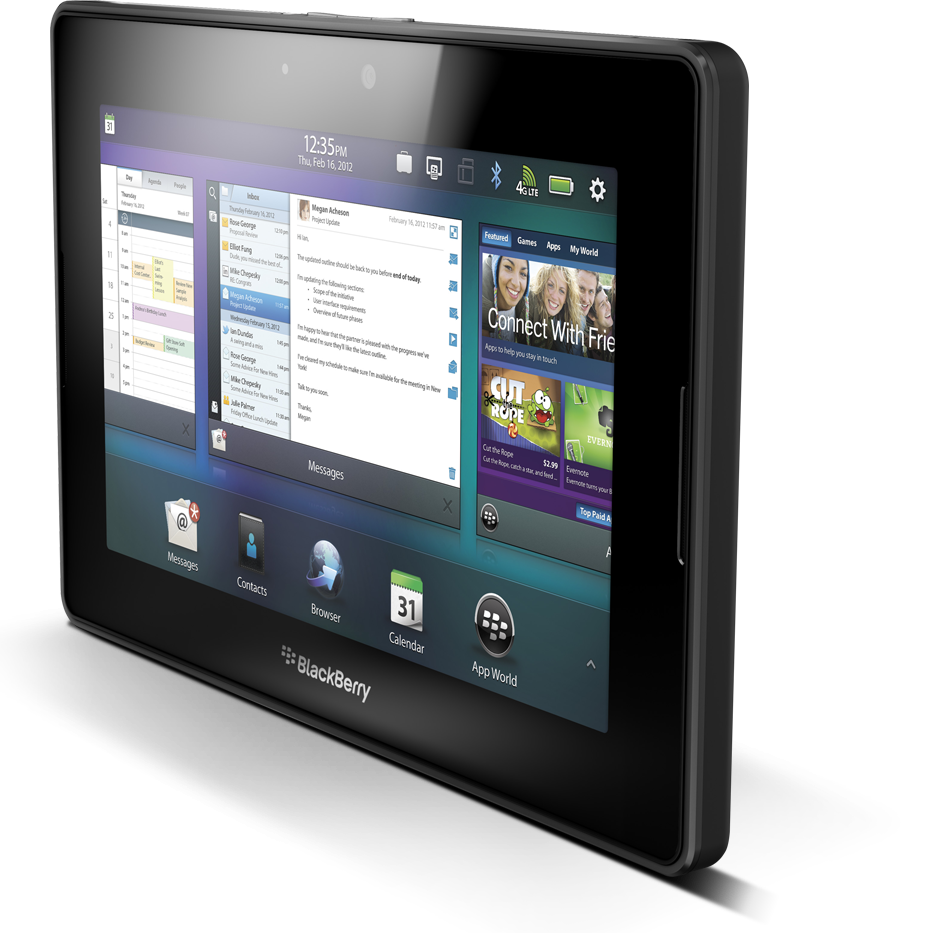 The BlackBerry PlayBook is BlackBerry's first tablet and their first device using a brand new QNX-powered operating system. The 7-inch tablet boasts a characteristic touch-sensitive bezel which enables a whole series of gestures to summon menus and switch between applications. BlackBerry Bridge allows data from a BlackBerry smartphone to be seen and worked with on the PlayBook, though software updates introduced many of those functions as stand-alone on the tablet. The BlackBerry PlayBook was announced on September 27, 2010, and released on April 19, 2011.

The original version of the device was Wi-Fi only, but a year later LTE-enabled PlayBooks were made available. Models were produced with 16 GB, 32 GB, and 64 GB of internal storage, and had a full array of inputs, including the first micro-HDMI port on a BlackBerry device and a custom quick-charge plug. The PlayBook was the first BlackBerry device to employ video chat and a front-facing camera, a feature which was later brought to the smartphone side on the BlackBerry Z10. On the front face are two high-quality speakers to provide stereo sound.

Unable to integrate a Yahoo! Mail account on your BlackBerry?

Having issues with being able to integrate your Yahoo mail on your BlackBerry? You're not alone. Here are some possible fixes to try if you're having the issue.

BlackBerry CEO John Chen spoke with candor this morning on the earnings call about the next phase in BlackBerry's licensing strategy. In particular, he mentions one of the company's partners is very excited to build a tablet based on Android.

It's not in the works

It never seems to fail. Any time you stick BlackBerry CEO John Chen in a room with the media someone is going to ask about a BlackBerry tablet and, no surprise, it has happened again. This time around it was CNET who asked the question whether or not BlackBerry was working on a tablet during the BlackBerry event at Mobile World Congress. For John Chen's part, the answer remained mostly...

Yeah trying to use old equipment, you end up doing searches and getting outdated information that no longer works. Just the way it is.... no one is going to try pruning out outdated info here.

Grab a bargain with a BlackBerry PlayBook at under 80 bucks

For many of us the BlackBerry PlayBook is a thing of the past. Sure, I still have mine, but I'll be honest and say that these days I very rarely switch it on. The PlayBook itself is still, in my eyes, a great tablet - it's just with no ongoing support from BlackBerry it is I'm afraid a dying breed. But on the off chance that you did fancy picking the PlayBook at a silly price, you...

Grab a BlackBerry PlayBook for $69.99 today only from eBay

If you're looking for BlackBerry PlayBook, then we have a deal for you. Ebay is currently selling the 16GB version of the PlayBook for just $69.99. That's a sharp discount from its normal price of $499.99. This price is about $32 less than what is listed for the 16GB PlayBook on Amazon right now. However, you can double your storage for just about $16 more, picking up the 32GB...

From the forums: The BlackBerry PlayBook 10 concept and this one looks a real beauty

Currently, as far as we know, another PlayBook isn't on the cards anytime soon for BlackBerry. That doesn't stop our CrackBerry forum members from wanting a new and improved BlackBerry 10 tablet though. Andreas Kimishis1 has come up with yet another concept and I must say that it looks glorious. Since BlackBerry confirmed that the original PlayBook would not a get BlackBerry 10 update...

We posted recently that CascaRun Sports Tracker had been updated for BlackBerry 10 smartphones and with the update brought a free version so folk could experience the app before committing to the paid edition. The Pro edition is now also available for the BlackBerry PlayBook. Now clearly you won't be running, cycling, skiing etc with a tablet but where this may well come in handy is...

I think the Playbook has officially from BlackBerry been considered end of life already for quite some time hasn't it? I guess this upcoming 4Jan2022 deadline will however make them even more limited...

Why tablets are not on BlackBerry's roadmap

This is such a sensitive topic for many PlayBook owners — and rightfully so. As a fellow BlackBerry lover, a respectable level of sympathy should be given to those who have invested in BlackBerry's only tablet. It is truly a remarkable device that had a lot of promise. However, business will always be business no matter what opinions or emotional attachment we may have for our products...

Now that the PlayBook is officially dead, which non-BlackBerry tablet would you buy next?

Now that the BlackBerry PlayBook is officially done with (for real this time), many users are left wondering what their best option for a tablet may be. In fact, the first email I read this morning was from my older brother, asking me what tablet he should replace his PlayBook with. And reading through the CrackBerry forums shortly after, I came across this thread where the question...

CrackBerry Mailbag: The Death of the PlayBook

Following yesterday's BlackBerry PlayBook update and subsequent recognition that this is the last OS update the BlackBerry PlayBook will ever see, the community has been pretty vocal. Looking back at the history of the PlayBook, it really is a sad story. So much potential, but instead we're left with shattered dreams, broken promises and what still feels all these years later, like an...

A while back we let you all know that BlackBerry was still actively doing development on the BlackBerry PlayBook OS and for those of you who might have missed it in the forums, a new OS update is now available for download. Noted as OS 2.1.0.1917, this release doesn't bring any huge changes along for the ride but it updates a lot of the system files as well as the Adobe Flash Player...

A short while ago we ran a poll asking if you still use your BlackBerry PlayBook. To be honest - I wasn't feeling overly positive about the results bearing in mind that the BlackBerry tablet was first released in 2011 - which seems an age away now.  I'll be honest and say that I still use my PlayBook, but only from time to time. I tend to reach for my iPad mini most of the time for...

If you've been wondering whether or not BlackBerry was still actively working on PlayBook OS updates, it seems there's enough information out there to say they are indeed. Although there's no sign of when or even if it will be rolled out, they've now got OS version 2.1.0.1895 certified and right at this very moment, there's a BlackBerry Bridge update rolling out through BlackBerry World...

From the forums: The BlackBerry Docklet concept - A good or bad idea?

Yep, it's concept time again, but this time with a twist. Forum member D_Gui has again been busy, although as you can see this one isn't a BlackBerry 10 smartphone. With this one we're back in tablet land so to speak. The idea with the Docklet concept is that the tablet itself doesn't have BlackBerry 10 software built in, but instead mimics your BlackBerry when you dock it.  Whether ...

Is it still working?