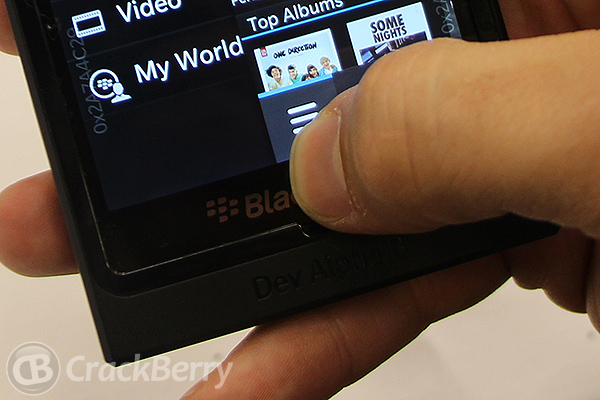 Today a whole bunch of videos hit the internet showing off the BlackBerry Dev Alpha B hardware running BlackBerry 10. In many of these videos, including our CrackBerry hands-on as well as the on-stage keynote demo, it appeared in some instances that the upward swiping motion often took more than one try to execute properly.

Catching up on tweets, forum posts, article comments and emails, it seems many people are taking this repeated observation to mean that it's a sign of the BlackBerry 10 software still being in beta and not quite polished and ready for prime time yet. Heck, one journalist even asked RIM CEO Thorsten Heins about this apparent issue with peek during today's executive Q&A. It's an understandable conclusion to come to based on the observation, but it's not the truth at all.

In reality, to blame for this need for an occassional extra swipe is the casing on the Dev Alpha B. With the Dev Alpha B RIM wrapped the display with a bulky shell, which as you can see in the photo above actually covers part of the bottom of the display, almost giving it a chin. The location of this casing kind of blocks the natural position of the thumb when it comes to making that swipe up gesture.

Having played with the actual BlackBerry hardware and also updating my Dev Alpha with today's released BB10 Developer build, this issue doesn't exist at all. Talking to a couple of the people providing Dev Alpha demos for RIM, they confirmed this was there take on it as well. It's really just a matter of the Dev Alpha B casing being a little in the way.

When you look at the Dev Alpha B, especially with the battery door off as pictured above, you really get a sense that the Dev Alpha B has a little more to it than meets the eye. Think about it. RIM is building a new BlackBerry 10 phone to hit the market in the new year. That hardware has to be very far along at this point. They ran out of Dev Alphas and needed to get more to hand out.

It wouldn't make sense to design a brand new updated Dev Alpha device. Instead, you take the parts you're already working on (the chassis and guts from the real deal) and you wrap it in a bulky and chunky shell, make it next to impossible to take apart, and you give that out instead. It's the easiest, cheapest and most efficient way to get a second series of Dev Alphas out there. Look at that photo. You can almost see a round-cornered frame tucked within a square casing. And on the front side of the phone, the casing almost looks literally like a case tucking tight to the display. Looking at the device and thinking about the notion of a Dev Alpha B, this just makes logical sense. That said, I don't think any devs will want to attempt ripping their Dev Alpha Bs apart anytime soon to see if there's any extra magic there.

But as for the issue at hand of a couple extra upward swipes needed to get the minimizing app / peek gesture going, the casing here is the thing to blame. It's chunky and covers part of the display up. It's kind of a silly mistake to have been made -- especially seeing as how these devices are being used in demos, but that's the reality. I think part of why it happened was that when you use the Dev Alpha B completely normally infront of you with one thumb, it doesn't seem to happen much (the natural angles all work). But if you start to use an index finger or turn the phone away from you and try, etc., that's when the case gets a bit in the way.

So that's the story. If you see any people getting this wrong and misreporting it, do your CrackBerry duty and send them to this article and straighten them out.