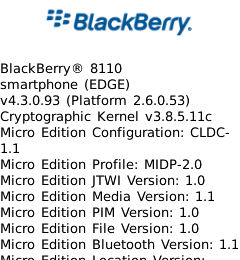 Hmmm... what’s this we have here, an 8110 in the wild?…seems that way, the 8110 was a “rumored” device for a long time now and today we can put some of those rumors to rest as we got our hands on one..the device was running v4.3.0.93 OS (not sure as to why 4.3.1 was not running on it) and includes GPS (which is absolutely amazing, in the testing it even tracked how fast we were driving down the road) and is looking pretty sweet to me! While it lacks the WiFi found on the GSM-based 8120, RIM has plenty of devices waiting to be launched that will include this feature (can you say 9XXX Series, more specifically 9300), unfortunately at this point we have no indication as to what GSM carrier the device will be assigned to as the “hands on” with the 8110 was with an unbranded device. Looking at the 8310 and 8320 Curve, it could make sense that AT&T and Rogers would get the GPS-equipped 8110 while maybe T-Mobile will get the WiFi-enabled 8120 that's already available outside North America. My time with this device was short (the photos had to be taken with my BlackBerry Curve) but at least at this point we know the 8110 is definitely out there and no longer a “rumor”. No definitive launch date or pricing either (sorry guys!, as I stated my time was short with this one). Some of the finer points in this Pearl form factor are listed below.

Hard to tell from these pics but the keypad layout is slightly different.