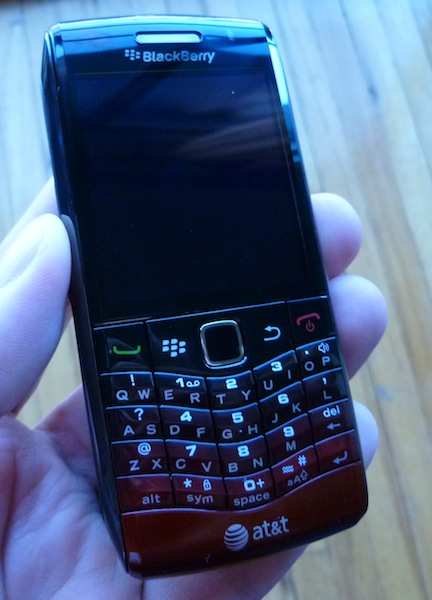 While I was never a Pearl user in the past, something about the Pearl 3G intrigued me since we first saw it pop on the radar back at WES 2009. Many users got their start with a Pearl and either stuck with it or moved on to a full QWERTY device. I never had the pleasure of rocking one myself so I've been a bit anxious to get my hands on a Pearl 3G and put it through my day. While I claimed on our WES bloggers reactions video that purple was the way to go, I really am impartial for the most part when it comes to color. My AT&T Pearl 3G is the sweet faded red and that's fine by me. Keep reading for my thoughts on the BlackBerry Pearl 3G from AT&T.

I've been bouncing back and forth between the Bold 9700 and Torch 9800 as of late, so heading to the Pearl 3G it's safe to say it's a small device. It feels good in your hand and is extremely pocket friendly. I really like the "candy bar" form factor and the overall size (or lack of size) of the Pearl 3G. The screen is a bit small off the bat so that takes some getting used to, but perhaps the biggest (and most annoying, at first anyway) adjustment is the SureType keyboard. I was never a big SureType fan on any device, so being forced to use it took a bit longer than I had expected. If you get the hang of it and throw away everything you know about using a full QWERTY device it's not that hard, but as big a fan of using a full keyboard as I am it was fairly tough to adjust without sacrificing my usage style. When jumping to a different device you never want to have to adjust your usage style too much to fit the device and the Pearl 3G keyboard is a prime example. As noted with the Torch 9800, you have to change the way you use your device a bit with the slider form factor. As Kevin put it, "it takes more steps to get less done". The reason I keep going back to my 9700 is the familiarity - the keyboard shortcuts, ease of use in OS 5.0 and the hardware itself (bring on the 9780!). The Pearl 3G makes you adjust things a bit, but if you stick with it you can make it work for you just like any other BlackBerry.

I love the overall size of the Pearl 3G. It feels great in the hand, and is the perfect size for your pocket. It's small and light and doesn't have the bulk of a larger device. The construction of the device feels solid as well -- there are no loose or "cheap" parts. The front of the device sports the screen and SureType keyboard. As usual the volume buttons are on the right side of the device along with a convenience key, and the charging port and another convenience key sit on the left of the device. Both sides have a rubberized coating that keeps everything safe and sound and helps with the grip on the device. On the back is the battery door (nothing fancy as it just pops off) and the camera/flash. Open the door and there is the battery, memory card slot and SIM slot. The cool thing on the Pearl 3G is the little SIM remover that we first saw back at WES.

Coming from full QWERTY devices, surprisingly SureType wasn't nearly as bad to use as I had made it out to be. After a few hours I was able to type fast enough to keep me happy (although not as fast as on a full keyboard) and I wasn't getting any crazy typos. Its just a bit of a learning processes to train yourself and your fingers to go where they need to be. Some things that annoyed me were the placement of the shift key (since I typically use the left shift on my Bold 9700, and it's placed on the right on the Pearl 3G) and the delete and alt keys. Having them a bit out of place or out of my norm was quite annoying at times. I did feel my fingers scrunching together a bit to keep in form to hit the right keys. I do feel that you need to "think" a bit more when using SureType to make sure you press the right key. Overall I can't say that SureType is bad, it just definitely takes some getting used to. Cranking out long emails is tough at times as I felt myself constantly looking back to make sure my words were coming out as I wanted them.

The 360x400 screen isn't the worst I've seen, but its not the greatest either. As far as messaging goes it gets the job done, however if you get into heavy web browsing things go south. Trying to do to much on the small screen actually gave me a headache at times, maybe because I'm used to larger screens (or maybe not). The Pearl 3G also sticks with 256mb of flash memory, not the 512mb upgrade we were hoping for. It doesn't really show any lag as it is, but having the memory boost sure wouldn't hurt when OS6 is officially released for the Pearl 3G down the road. The Pearl 3G has Wifi and adds wireless N this time around. There is a bit of a speed increase from this, but you'd be hard strapped to notice it much if you did a comparison with other devices.

The camera doesn't get any upgrades that it should have had, so its still stuck at 3.2mp with no better video recording. While it does what it does ok, it itsn't the greatest on a mobile device. I think it fell short on this one as the upgraded camera on the Torch 9800 and Bold 9780 defintiely add some luster to the newer devices.

I do love the feel of the Pearl 3G overall. It is totally easy to hold and is extremely pocketable (or "purseable" depending on where you carry it). It feels solid and well constructed all around. The colors are smooth and I especially like the "faded red" unit I have and it's definitely one of my favorite device colors to date. On the flipside if you're not a fan of the colors and maybe want a bit more "bulk", you can check out the full line of BlackBerry Pearl 3G cases including some cool multicolored skins (which are by far my favorite).

The Pearl 3G ships with OS 5.0 installed and is OS 6 ready. We had hoped this would be one of the devices to ship with OS6 ready to roll, but unfortunately we'll have to wait for an official release. There are a few leaked versions of OS6 floating around, but we'll get more into that in a bit.

All of the OS 5 standards are here - messages, SMS, phone, tasks, memopad etc. Everything I tested out ran solid and navigating around the OS was fine and dandy. The one thing I did miss is the keyboard shortcuts. I have long relied on them since the days of my 8830WE, so trying to get by without them (even for just a few days) was painful. I found myself struggling quite a bit to get to things I needed, but that doesn't fall on the device itself as much as how I choose to use it.

Obviously some things look a bit different on the Pearl 3G given the size of the display. Things like the calendar and email messages looked a bit more "scrunched" than I would have liked. It takes some getting used to when coming from a larger 360x480 display but it's not the worst to have to adjust to.

I did take the liberty of firing up OS 6 on my review unit to give it a sping and it runs surprisingly well. I still don't get the real point of the views of BB6 but they are easy enough to ignore. The new OS doesn't really make anything on the Pearl 3G better than with OS 5, but it does bring some new features like Universal Search that are welcome on any device. The big drawback for me was having the WebKit browser on the Pearl 3G. It's a great browser and brings along some awesome new features, but the display size of the Pearl 3G really kills a lot of pages and navigating around most times was frustrating at best (the same could be said for the OS 5 browser sans the new features like tabbed browsing).

Overall I think the Pearl 3G is a pretty good device. I think that more hardcore users will definitely pass for a full QWERTY device with a bigger display. Casual users or those coming from a standard dumb-phone may be more prone to adjust easily to the style of the Pearl 3G. For me the deal breakers are the display size and the issues I had with using the keyboard to type and navigate the device. Anyone who used (or still uses) an 81xx series Pearl will welcome the upgraded specs and trackpad of the Pearl 3G.

More on the BlackBerry Pearl 3G