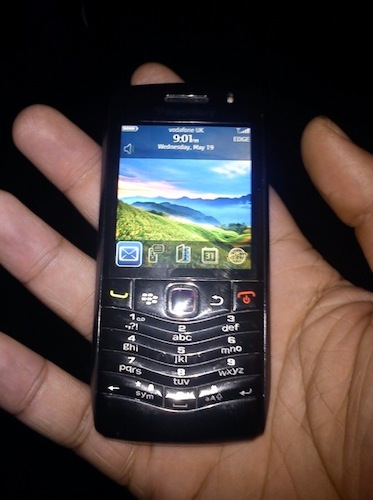 In Canada, many retailers have already started their ordering processes for the BlackBerry Pearl 3G. With pre orders being taken, shipments in transit and some folks even being able to score the devices in a small percentage of stores. Across the pond in the UK though, Vodafone is just revving up for their release of the sexy new BlackBerry Pearl 3G. Luckily, we've got some information to share with you all that comes to us from an attendee of the event, big thanks to chirag for sending this stuff in too us. Read on for more details on what to expect when the BlackBerry Pearl 3G goes on sale for Vodafone UK.

First off, folks in the UK will be pleased to know that their will be no lack in selection of colors when the device is launched over there. The BlackBerry Pearl 3G will be available in black, white and pink from Vodafone. According to the information, the devices being shown off are currently running on OS 5.0.0.623. This differs from what we have seen here in Canada where they are being released with OS 5.0.0.629. It's plausible that the Vodafone versions will see an update before they hit market.

Ready for what may be the disappointing news for some? It appears that only the BlackBerry Pearl 3G 9105 will the only version available at launch. But that said, Vodafone is still open to options depending on sales of the 9105. If it does not do well, they are said to have the option of bringing in the BlackBerry Pearl 3G 9100. To close out, no official launch date or pricing was announced as of yet but, it's expected to fall in line with that of the BlackBerry Curve 8520 which starts at $0 with a minimum of £25/month tariff. That's it for now, we'll let you all know if more details emerge.