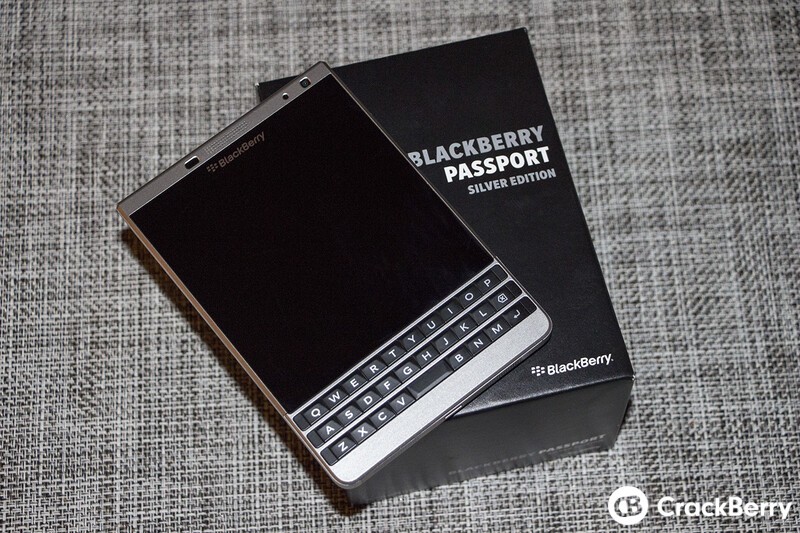 With that in mind, it's certainly worthy of a closer look, even if the majority of the changes are cosmetic rather than internal. I'm not going to cover every single aspect here like I would in the review of a a brand new device. Instead let's just take a nice overview of some of the changes that I think are most important to those who may already be Passport owners trying to decide if they want the Silver Edition or, the more likely scenario, those who already know all there is to know about the Passport but haven't pulled the trigger on purchasing one. If you're looking for a massive run down I fully suggest our original BlackBerry Passport review instead.

As noted by Di Tao, BlackBerry's Senior Industrial Designer, who led the design on the Silver Edition, the overall structure of the device has been optimized from the inside out to improve user experience and antenna performance, plus they enhanced the strength of the device by way of the reinforced stainless steel frame. Finally, they made some improvements to the keyboard over the original Passport design, making the keys easier to press and overall more comfortable in the hand.

I have no problem in admitting that when I first saw the Silver Edition, I wasn't sold on it. If you partake in listening to the BerryFlow podcast on a regular basis, you've heard me say that several times. While I'm still pretty partial to my original red BlackBerry Passport, I've since retired it and now use the Silver Edition exclusively because it just feels ohhhh so much more luxurious. Unlike some folks, I wouldn't go so far as to say the hardware feels like a Porsche Design product, but it certainly feels more premium than any of the other Passport versions available.

That stunning silver finish with refined, curved corners not only looks great but feels great in the hands, especially with that knurled pattern on the back cover. Unlike my red Passport, which has a tendency to slide around in my hands, the Silver Edition is just plain easier to hang onto. Another thing I love about the Silver Edition hardware is the look of the camera on the back of the device. Yes, it's raised up a little bit higher than the original but that doesn't affect anything in the grand scheme of things. Unlike the original Passport, there's a greater attention to detail here. It simply looks better and more premium. Classier.

Breaking down the specs for the BlackBerry Passport Silver Edition is pretty easy. They're largely the same as every other version of the BlackBerry Passport with some slight changes to the dimensions and weight of the device. That means you get a Qualcomm Snapdragon 801 with 2.2GHz Quad-Core CPU with an Adreno 330, 450MHz GPU along with 3GB of RAM, 32GB of flash storage that is expandable up to 128GB officially through the use of a microSD card.

For the display, you get a Gorilla Glass 3 enforced 4.5-Inch, 1440x1440 LCD that runs at 453 PPI. If staying powered up is a concern, which it shouldn't be with a Passport, you get a 3450mAh integrated non-removable battery. That battery also powers the 13-megapixel auto-focus camera with OIS and Back Side Illumination capable of shooting 1080p video as well as the 2MP fixed-focus shooter on the front capable of shooting in 720p.

Other fun stuff includes USB On-The-Go, SlimPort access for USB and HDMI out as well as Wi-Fi Direct, Miracast, FM Radio support and NFC. Plus, the unique calling feature called Active Leak Compensation, which automatically adjusts the call volume based on how close you hold the device to your ear. I should note there is one thing missing here that's mentionable and that's the lack of wireless charging. Although the Silver Edition is closer to the AT&T version of the BlackBerry Passport than it is to the original, the wireless charging options remains exclusive to the AT&T BlackBerry Passport.

When it comes to the dimensions of the BlackBerry Passport Silver Edition, there are only really minor differences but those coupled with the placement of the camera and flash on the device do tend to throw things off when it comes to accessories. Here's how the different versions stack up.

Are you concerned about what networks your devices run on? If so, there's not a lot to worry about in terms of differences here across versions but as you can see below, the AT&T version lacks band 13 LTE, which as far as I know is a Verizon band but as we should all know by now, no versions of the BlackBerry Passport work on CDMA networks such as Sprint and Verizon, so it being missing is really a non-issue.

In the end, if you're looking for the version that has the best compatibility across networks, the short answer is there really isn't much difference even at the model number level, especially for the U.S. and Canada. If you REALLY want to get technical, there's a nice rundown of compatible carriers in the CrackBerry Forums thanks to Raino and many others that breaks things down by regions as well as specific model numbers.

Differences in the Silver Edition

The Camera and Flash

The camera on the Silver Edition at first blush is a minor change but aside from the look of it being updated to offer better protection from scratches and the flash placement being moved around, there's some speculation that it may have been improved slightly as well. Ahead of the launch of the Silver Edition there were mentions of the camera possibly being upgraded based on comments made by BlackBerry CEO John Chen on Twitter. Did they really change the camera? Well, yes, but seemingly not in the way everyone may have been expecting. Through some analysis, information shows they did indeed change the front facing camera from one provided by Samsung Electro-Mechanics (SEMCO) to one provided by LG Innotek (LGIT). It remains a 2MP fixed-focus shooter capable of shooting in 720p but there's noticeably less lag when using it whereas on previous versions of the BlackBerry Passport, the front facing camera was oddly slow to respond to movement. So they never changed the rear facing camera at all? Technically speaking, no. It's still the exact same camera module installed running the exact same firmware that all other versions of the BlackBerry Passport are running, but some claim to see some improvements in the clarity and vibrancy in the images shot on the Silver Edition compared to others. My personal take, it could be attributed to a better lens being used but in my testing it's not really enough to make a fuss over.

Although BlackBerry made no mention of any speaker or volume upgrades on the Silver Edition, I do have to say that when playing music through the device, not over headphones, it does generally sound slightly louder and slightly clearer. With no mention of changes and no way to determine if the hardware has changed without ripping the device open, I think it's safe to say any perceived sound quality differences are simply coming from the fact there's more metal on the Silver Edition than any of the other Passport versions. Obviously, the earpiece has changed slightly in looks but the sound quality itself remains the same in my testing.

If you looked at the dimension comparisons in the specs portion, you'll already know the Silver Edition is ever so slightly larger. If you thought the original Passport or AT&T Passport were too heavy, you might want to stay away from the Silver Edition as it's even heavier due to the reinforced stainless steel frame being improved to provide extra strength and durability. Granted, it doesn't really feel all that much heavier to me but that's likely because I'm already used to carrying a Passport around. As for the size, well, the squared off top and rounded off corners added some height to the Silver Edition but honestly, it's only just enough to mess with some form-fitting accessories that you'll not be able to re-use if you're moving from a different version of the Passport into a Silver Edition.

Speaking of accessories, BlackBerry rolled out a bunch of new ones strictly built for the Silver Edition such as the Leather Flex Shell Case, Leather Flip Case, and Sync Pod that works with official cases and shells. If you own a different version of the Passport, you're going to have to go ahead and purchase all new accessories to protect your device.

Of course, some folks are likely also asking if the Silver Edition accessories work with older Passport versions. The short answer there is no. Due to the changes made on the Silver Edition, Silver Edition accessories won't really work on any other versions of the Passport. However, there is a long answer as well. The long answer is yes, but there are some caveats. For example, the Silver Edition Flip Case will somewhat work on all other versions of the Passport. I say somewhat because the flash location will be blocked but if you don't use the flash all that often and really want the case, both the original and AT&T Passport fit inside and show the LED when closed. In the end, I don't really suggest it but I can't tell you what to do.

Although I was rather skeptical of the BlackBerry Passport Silver Edition when it first started appearing, after having used it for a while now, I have no issues with saying that it's a great addition to the Passport lineup. Just like the original Passport and the AT&T Passport, it's not going to be a device for everyone, especially those who might already own a BlackBerry Passport. But as we've witnessed already, there are plenty of people out there 'upgrading' to the Silver Edition and it's not hard to see why.

Yes, it's true. It's just another BlackBerry Passport. But the refinements made and materials used make it a worthwhile purchase and with it costing only $50 more than the others, BlackBerry just might catch some folks who didn't like any of the previous versions. Yes, there's an argument there that if they didn't like any of the prior versions, there's no reason they would buy the Silver Edition but us humans are funny creatures and sometimes all it takes is a little bit of additional shine and we're sold. You know it's true.