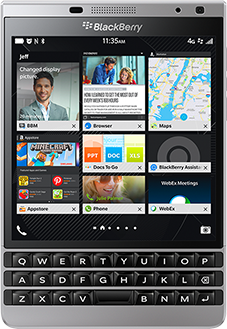 The BlackBerry Passport Silver Edition was launched on August 4th, 2015. The device features a physical keyboard, a 4.5" 1440x1440 LCD display and a 3450mAh battery. The BlackBerry Passport also introduced a capacitive touch keyboard that allows users to perform gestures on the actual keys — for deleting words, predictive text or scrolling the browser, for example. Inside the Passport is 3GB RAM, 32GB of flash storage that is expandable up to 128GB, powered by a Qualcomm Snapdragon 801 2.2GHz quad-core processor. In the camera department, the BlackBerry Passport makes use of a 13MP 1080p front facing camera along with a 2MP 720p front-facing camera.

This deal will be gone in a flash!

Remember before the Priv was announced there were multiple sightings of the BlackBerry Passport Silver Edition caught running Android? At the time, it was caught up in the codename confusion and was better known as Oslo and well, we know now that it was in some ways, a test bed for BlackBerry's Android smartphones. Although they never went on sale for the masses, a new Kijiji listing...

Snag a BlackBerry Passport from Amazon today for only $315

Save 20 percent on the BlackBerry Passport!

Let's change things up a bit

Get BlackBerry 10 device skins from UKarbon

Skins for devices have been around for some time though they're becoming few and far between for BlackBerry 10 owners. However, that is changing as a UK based company has started to offer up skins for BlackBerry 10 models. We take a look at a few of them.

The holidays and Black Friday are quickly approaching, and if you're looking to pick up a new BlackBerry for someone (or yourself), you'll want to check out the deals BlackBerry have announced. Right now, select BlackBerry 10 smartphones are on sale through December 1.

Understood.... What a pity that it was never completed.

Every so often I find myself heading over to the UK carriers and retailers websites - more than often to see who's 'not' selling BlackBerry 10 devices. Today I ended up with Carphone Warehouse who historically have been pretty loyal to BlackBerry. I was quite surprised when I hit up the BlackBerry Passport page as the two color options were not quite what I was expecting - Black or the...

Silver is the new black

Announcing the winner of the BlackBerry Passport SE!

Before the weekend kicked off, the folks over at 4GNews posted up some images of the BlackBerry Passport Silver Edition running Android Lollipop but what most folks missed was that the images were taken from a video. Rather then posting just those images, we decided to wait and see if the video would pop up and sure enough, it has now appeared. The device appears to be the same device...

Has anyone had to replace their Passport's battery?

Which version of the BlackBerry Passport do you prefer?

Now that there is essentially three different versions of the BlackBerry Passport available for purchase, excluding the color variations which increases that number even further, we figured we should ask which version is preferred amongst our readers. Perhaps you bought the original version but now really, really want the Silver Edition or perhaps, you picked up the AT&T version...

How to put Passport SE in storage (the battery issue)

Not everyone is happy to open up their phone in this way but certainly it would seem to be the only way around the problem. BlackBerry sure ainâ€™t gonna fix it now.

We have a brand new BlackBerry Passport SE to give away. Keep reading for details on how to enter!

Just when you thought the Android rumors were over

This BlackBerry Passport SE appears to be running Android

As I'm sure just about every CrackBerry reader knows already, BlackBerry has officially announced the BlackBerry Passport Silver Edition and as expected it's running BlackBerry 10. But what if some of the pre-release versions were set up to run Android? A new set of images, as well as a video, have now appeared over at Mondo BlackBerry which appear to show off just that. A pre-release...

If you've been holding off on picking up a BlackBerry Passport Silver Edition until it was available for purchase through Amazon, your wait is over. The device can now be ordered through the online retailer in the US for $549 and you could have it as early as August 7, assuming you're an Amazon Prime member. Something to be aware of though when ordering from Amazon is the fact there'...

Thank you all for the answers. Two more questions.