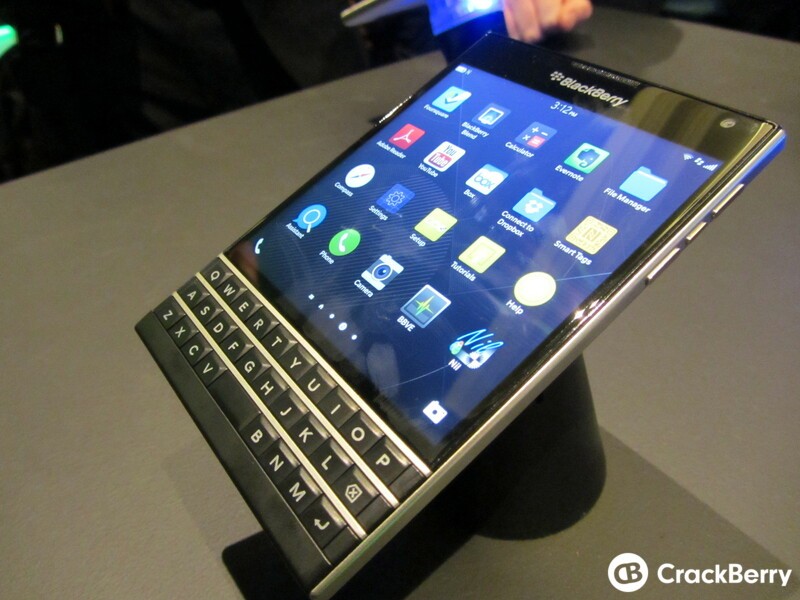 The BlackBerry Passport was officially launched yesterday. We covered a lot from the Toronto event and I'll have a quick recap from the London event soon. However, that's not what this post is about. What I want to tell you is that, if you're in the U.K. you can now purchase the BlackBerry Passport from Selfridges, London. BlackBerry will have a "shop in shop" within the Selfridges Technology Hall, so head down there to get your hands on one.

The BlackBerry Passport will be priced SIM free at £529 (including VAT), which was what we confirmed yesterday. This was the price point for the BlackBerry Z30 when it launched a year ago today, in London. If you do head into Selfridges, Oxford Street, London, do send in your photos we'd love to see them.

Also, if you haven't checked it out yet, you can read our BlackBerry Passport review, too.

The BlackBerry Passport is now available SIM free at Selfridges for £529.95 including VAT. For the first time, BlackBerry will open a 'shop in shop' within the Selfridges Technology hall.

Richard Jones, Selfridges Technology Head Buyer comments "We are very excited to continue our partnership with BlackBerry, launching the new and uniquely designed BlackBerry Passport device in the UK at Selfridges. With the newly opened Shop in Shop at Selfridges Oxford Street, this truly marks a new and exciting era in the BlackBerry story."

Richard continues "We have long supported BlackBerry launches in the UK, and feel this is an exciting next step with the brand."

The BlackBerry Passport encourages productivity with a 4.5" square touch screen that optimises screen real estate to enable users to read 60 characters per line, whereas a typical all-touch device in portrait orientation only displays 40 characters. When you combine this with a revolutionary touch-enabled keyboard, you will be able to get more done on your smartphone, without feeling the need to turn to your PC or tablet to read and write emails, view maps, surf the Web or edit documents.

· Innovative Screen - The BlackBerry Passport has a 4.5'' square full HD screen and a pixel density of 453 dpi, offering the best resolution of any device in its range including the Galaxy S5 and iPhone 6 Plus.

· Best-in-Class Battery Power – The 3450 mAh battery is the largest among the top selling smartphones and phablets and, when tested against a very active user, provides up to 30 hours of mixed use. It's our best battery power to date.*

· BlackBerry® Keyboard – The BlackBerry Passport's revolutionary new keyboard brings innovation to input with a responsive touch surface that lets you perform many touch functions directly on the keyboard. You can scroll web pages, flick to type or slide along the keys to move the cursor, leaving the full screen space for viewing.

· BlackBerry® 10 OS 10.3 – The BlackBerry Passport comes preloaded with the BlackBerry 10.3 operating system, including new features such as BlackBerry® Assistant, BlackBerry® Blend and Amazon Appstore. It has a fresh look that incorporates updated icons and an action bar so that each user's most commonly accessed functions are in the center of their screen.

· BlackBerry Blend - BlackBerry Blend seamlessly brings messaging and content that is on your BlackBerry Passport to your computer and tablet. Get instant notifications, read and respond to your work and personal messages, and access your documents, calendar, contacts, BBM™ and media in real-time on any device, powered by your BlackBerry.

· BlackBerry® World™ storefront – BlackBerry World showcases essential apps for the BlackBerry Passport smartphone customer, including productivity apps like Bloomberg Professional. Get the best on BlackBerry World, uniquely suited to you.

· Amazon Appstore – Preloaded on BlackBerry Passport, users can access popular consumer apps through the Amazon Appstore, including the latest Android games and apps, such as Groupon, Netflix, Pinterest, Candy Crush Saga and Minecraft.

· BlackBerry® Natural Sound – BlackBerry Passport comes with powerful speakers and a quad microphone system that delivers a high-quality listening experience. BlackBerry Natural Sound Technology is built in to adapt Wi-Fi and cellular call sound depending upon phone position and background noise, automatically adjusting volume so you don't have to.

For more information about the BlackBerry Passport from Selfridges please visit Selfridges.com