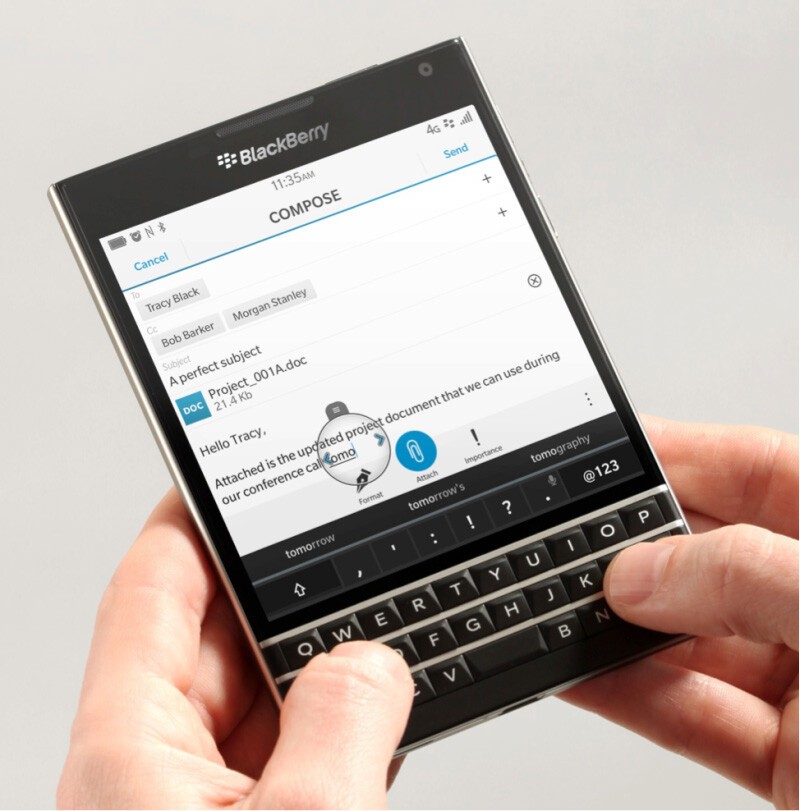 With the BlackBerry Passport now out there and in the open, there is still some folks who don't quite grasp how the keyboard and trackpad will work together or how it adds to the level of productivity one can achieve. To help offer a better look, BlackBerry has now posted up more information on how the keyboard will work along with the touch-enabled keyboard. For most CrackBerry readers and Passport fans, this likely isn't new information. In fact, the post kind of sort of leaked early but just in case you missed it the first time around, have a look!

BlackBerry Passport is a unique device that was built with productivity at its core. The revolutionary new physical keyboard is responsive to touch, so you have more ways to control your smartphone without having to use the touchscreen. With rows of touch-sensitive physical keys, BlackBerry Passport combines the efficiency of tactile typing with touchscreen-like navigation to deliver on that productivity promise.

This way, you'll be able to keep your eyes on the goal – getting things done. (If you're a developer, head over to the Developer blog to learn how you can take advantage of the new BlackBerry Passport keyboard in your apps.)

With the Passport's touch-enabled keyboard, you'll be able to navigate web pages, apps and e-mails by lightly brushing your fingers over the keys, which helps with things like scrolling and cursor placement. It's a minimalist design that maximizes BlackBerry Passport's already-awesome amount of screen real estate. You'll be able to read documents faster, as well as keep your fingers close to the keys, ready to type.

It's one thing to look at this device and think it might not be for you but as we've mentioned many times now, it's one of those things that can't be fully realized until you actually pick it up and use it.