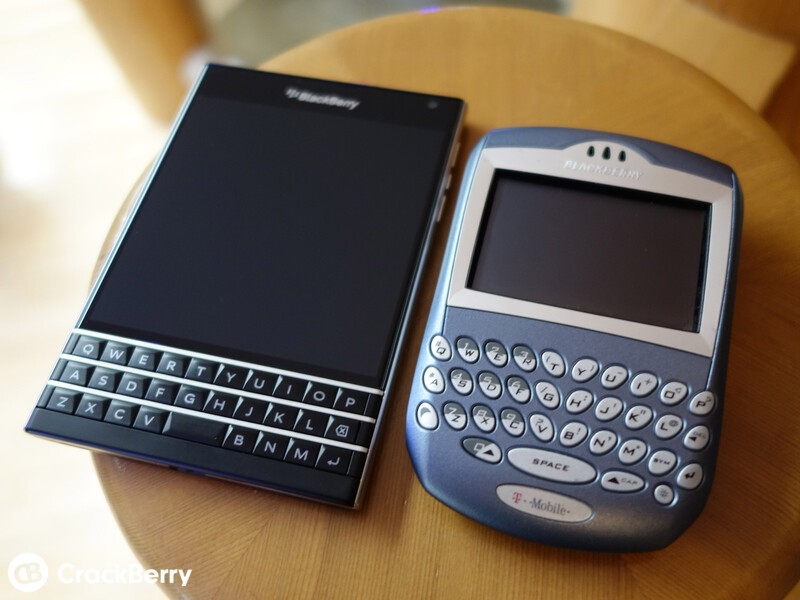 When you read phone reviews, you don't typically see Fun as a category upon which different devices are rated and compared - it's things like Performance, Design and Battery Life that are the norm. It's too bad really that the fun factor isn't given much consideration. As much as tech products are there to add utility to our everyday lives, given how much we use and rely on tech these days it's a nice bonus if the ownership experience can bring us a little extra joy, too.

Enter the BlackBerry Passport. I have been having an absolute BLAST as a BlackBerry Passport owner these past few weeks. I haven't enjoyed owning a new phone this much since 2005, which is when I got my first BlackBerry (which by the way I felt was BIG and UGLY when I first put my hands on it). And while the Passport is proving to be a solid performing phone once you work through the initial adjustment phase (it takes a few days to get used to the wide body design and three row keyboard), it truly is the fun factor of being a Passport owner that I'm loving the most. Which is kind of ironic really, considering BlackBerry set out to make the Passport the ultimate tool for productivity (and yes, it excels at that too... Instant Actions in the Hub FTW!).

The Good 'Ol Days of BlackBerry All Over Again

Part of the fun and excitement of being an early adopter of tech is the exclusivity of it. For the better part of a decade, the world has become phone-obsessed. When you're the first to buy a phone that has not yet widely been seen or held by the masses, it gets a lot of attention wherever you go. I've been fortunate over the years to enjoy this experience on many occasions, often by being the first to have new BlackBerry Smartphones that are not even available yet, or exclusive phones like the Porsche Design devices that you'll rarely see in public. And much to the chagrin of CrackBerry Nation, beyond BlackBerry I have often been a first-day purchaser of new smartphones and gadgets from other platforms as well - having the newest iPhone as soon as it comes out is always an attention getter (and a good way for me to get into the newspapers with the aim of helping promote our sister site, iMore).

No phone I have ever owned has received as much attention and reactions from people I encounter though as the newly-announced BlackBerry Passport. Talk about a conversation starter! I've been leaving the house the past week with the Passport in one pocket and the iPhone 6 Plus in the other. The iPhone 6 Plus gets some attention - people want to hold it and see how it feels. Then they say It's a bigger iPhone and they're over it. The same person looks at the Passport, and WOW. The reactions range from WTF is that?! to That's Awesome, I want one to That's Ridiculous and pretty much everything in-between. The Passport just looks so different to everything else on the market right now, even other keyboard BlackBerry phones, that it commands attention. And while the design of the device is polarizing — people straight up either love it or hate it — everybody seems to be in agreement that the capacitive keyboard is totally cool. Personally, I'm still in awe of the trackpad-like abilities of the Passport's keyboard. Being able to swipe to the left on a physical keyboard to delete words is basically magic. :)

Thinking back on my years of smartphone use, the situation I'm experiencing right now is parallel to when I first became a BlackBerry user. Back then, most people we're still using dumb phones - typically flip phones or small "candy bar" devices. By contrast, the old QWERTY BlackBerry stood out BIG TIME, and at that point not a lot of people where I lived were even familiar with BlackBerry (in bigger cities there was definitely more of awareness of it as a device for business people). Owning a BlackBerry back then was akin to being a member of an exclusive club. When you met another BlackBerry user, you wanted to talk to them, and it was cool if you did. Total strangers could bond over the fact they were using the same type of phone. Weird? Yes. But it was reality. BlackBerry was more than a phone back then. BlackBerry was a symbol, and it united those who owned it. Having a BlackBerry meant you were an important person. It was a badge of honor to carry your 'Berry in a holster and wear it on your belt (which was the style at the time, albeit not a very fashionable one).

It was fun to be a BlackBerry user back then, and those were really the days in which CrackBerry.com first launched. It was later when devices like the Pearl and Curve launched that BlackBerry was propelled into mainstream awareness. BlackBerry grew to become the number one smartphone manufacturer, and as it did that feeling of belonging to a club went away. You'd see BlackBerry phones everywhere, and no longer was it acceptable to speak to every BlackBerry user you encountered. After enjoying some time at the top, in more recent years things went the other way for BlackBerry as Apple and Android began to dominate smartphone sales. And as BlackBerry marketshare began to drop, mainstream media piled onto BlackBerry, making it more difficult for users to carry a BlackBerry with pride. For a while the sentiment got so negative against BlackBerry that in 2012 the New York Times wrote a story that using a BlackBerry was a source of shame.

Thankfully, those "days of shame" are behind us. The launch of BlackBerry 10 brought new life to the BlackBerry platform, and it's now with the launch of the BlackBerry Passport that I'm truly beginning to feel a return to the good 'ol days of BlackBerry, at least so far as being a BlackBerry owner goes. The Passport is a niche device. Based on the early sales numbers, BlackBerry looks poised to sell a good deal of them - but it's not going to be a phone you see everywhere. The ones BlackBerry does sell will definitely be seen though. In a sea of smartphones that all pretty much look like, the Passport stands out.

The people who have bought and are going to buy the Passport will not be your typical average mainstream consumer. The Passport is a next-generation device targeted at that BlackBerry user of old. So-so review scores won't and don't mean a lick to those truly thinking about getting a Passport. The people who want it will seek it out - not only for what it can do, but for what it represents. And like those earlier years of BlackBerry I remember so fondly, I have a feeling Passport owners who meet will immediately become friends.

I really feel the BlackBerry Passport marks a return to the best days of being a BlackBerry user, minus the holster, of course. :)