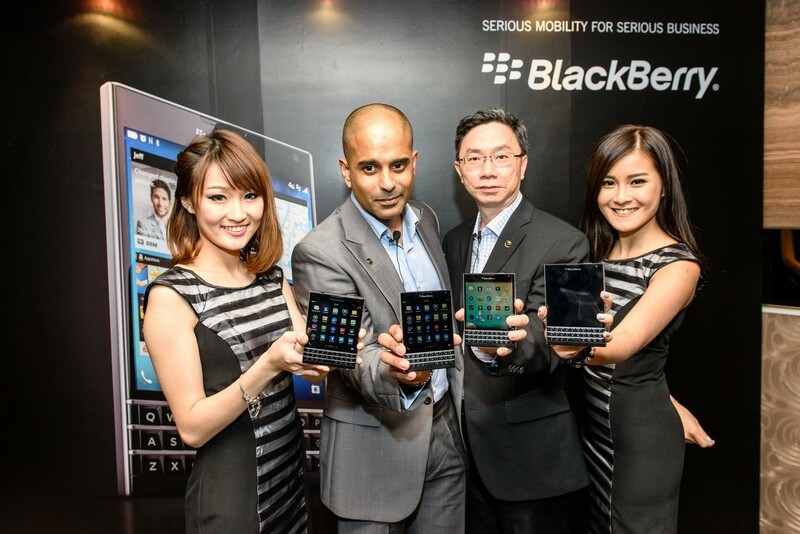 The BlackBerry Passport launch events have continued after Toronto, London and Dubai. This time around, the device has been announced for Malaysia and will be available through BlackBerry's authorized carrier, Celcom, from October 10, 2014 with contract for RM639; and through other partners ranging the product from November 1, 2014. The suggested off contract retail price is set at RM2399.

Kuala Lumpur, MY – September 25, 2014 – BlackBerry Limited (NASDAQ: BBRY; TSX: BB), a global leader in mobile communications, today introduced the all new BlackBerry® Passport in Malaysia. Featuring a large square touch screen and new QWERTY touch-enabled keyboard, the BlackBerry Passport is a device purpose-built for productivity-driven business professionals who want a smartphone that empowers them with the mobile tools they need to get things done, without sacrificing style or portability. The BlackBerry Passport will be available through BlackBerry's authorized carrier, Celcom, from October 10, 2014; and through other partners ranging the product from November 1, 2014. For more information, please visit BlackBerry.com/Passport

Ben Quirin, Managing Director of Indochina at BlackBerry said, "We are excited to mark a new milestone here at BlackBerry by introducing the first square screen design and touch-enabled keyboard smartphone – the BlackBerry Passport. Aimed at the mobile professionals, this ground breaking device equipped with the new BlackBerry 10.3 OS, will allow users to elevate their productivity and collaborate more effectively. The BlackBerry Passport will definitely be the talk of the town, breaking through the sea of rectangular-screen, all-touch devices."

Thoughtful Design for the Mobile Professional

Inspired by actual passports, the universal symbol of mobility, the size and form factor of BlackBerry Passport is portable enough to easily tuck into pockets and use wherever you go. Utilizing premium, robust materials such as Corning® Gorilla® Glass 3 for the display and forged stainless steel for added strength, BlackBerry Passport will provide the durability business professionals require in a smartphone.

The large square screen is optimized for viewing and creating content, and will make everyday tasks like reading and writing emails, reviewing and editing documents, web browsing, and map navigation, more comfortable and effortless. The BlackBerry Passport includes the industry's first touch-enabled keyboard with gestures that make typing, editing and navigating more efficient and accurate. BlackBerry's physical QWERTY keyboards have always made it easier for users to create polished, professional communications with exceptional accuracy. BlackBerry Passport's new QWERTY keyboard is almost four times more accurate than BlackBerry® 10 virtual keyboards – the error rate is on average 74% lower – so there are fewer typos to get in the way of what you're trying to say.

The BlackBerry Passport along with Porsche Design P'9983 smartphone from BlackBerry®, are the first devices to launch on BlackBerry's latest OS platform, BlackBerry® 10.3. They come preloaded with new productivity-enhancing features including BlackBerry® Blend and BlackBerry® Assistant, as well as the BlackBerry® World™ storefront and Amazon Appstore, offering access to the very best apps for work and play.

BlackBerry Blend brings messaging and content that is on your BlackBerry smartphone to your computer and tablet. Get instant message notifications, read and respond to your work and personal email, BBM™ or text messages, and access your documents, calendar, contacts and media in real time on whatever device you are on, powered by your BlackBerry. BlackBerry Blend is being introduced on the BlackBerry Passport and will work across desktop operating systems, including Mac OS X 10.7 +, Windows® 7+ and Android™ tablets running Android 4.4+ via cellular, USB or Wi-Fi connections. BlackBerry is also working to bring the Blend experience on other tablets soon. The downloadable version of BlackBerry Blend for Macs and PCs is available today at www.BlackBerry.com/Blend, on the Apple® App StoreSM for iPad tablets, or via the Google Play™ Store for Android tablets.

Highlight features of the BlackBerry Passport include:

A global leader in mobile communications, BlackBerry® revolutionized the mobile industry when it was introduced in 1999. Today, BlackBerry aims to inspire the success of our millions of customers around the world by continuously pushing the boundaries of mobile experiences. Founded in 1984 and based in Waterloo, Ontario, BlackBerry operates offices in North America, Europe, Middle East and Africa, Asia Pacific and Latin America. The Company trades under the ticker symbols "BB" on the Toronto Stock Exchange and "BBRY" on the NASDAQ. For more information, visit https://www.blackberry.com/us/en.