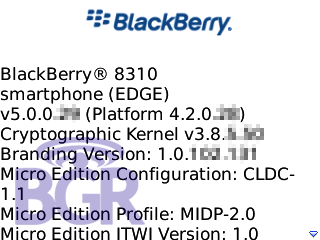 We haven't seen anything posted by our pal Jibi in a while, but he's now back and blogging for BGR and his first story is a good one for the hardcore CrackBerrys out there.... screenshots of OS 5.0!

It's funny and it hurts a little, knowing that we're still waiting for the official rollout of OS4.5 in the USA. What's new in OS 5.0? Not all that much really at this point in time. It looks like OS 5.0 will deliver the cool things that are in OS 4.6, like the new clock app and accessibility/reverse contrast menu, to the existing current generation of devices like the Curve 83xx and Pearl 81xx. As Jibi says, this is an early version of 5.0, so we can hope some more good stuff will make its way in to 5.0 before its eventual release.

BIG props to RIM though for their ongoing commitment to devices that have already been sold and on the market for a while. You can't go wrong investing in a BlackBerry.