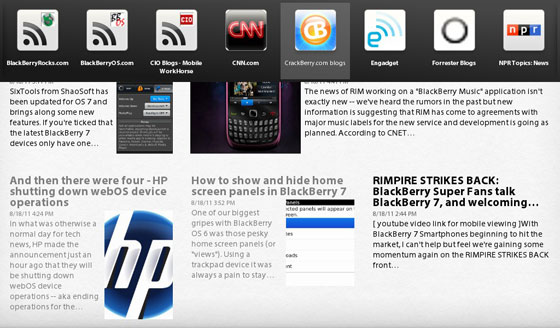 Version 1.1 brings quite a number of improvements to the application.

Not only that, but the once-laborious update process - for gathering new news - appears to be much more streamlined. The app completes its updates much more quickly than before and continues to gather data even after that "updating" screen disappears. Switching between articles or feeds once required a tap of the back button. No longer; switch between articles by tapping the arrows at the bottom or between feeds by swiping down from the top.

Version 1.1 of the BlackBerry News App for the PlayBook is a welcome and well-executed update to a wonderful free application. BlackBerry News is available to users in the United States and Canada.