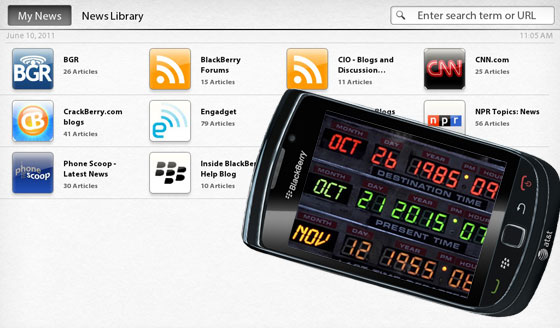 Yesterday - and I'm talking less than 24 hours ago - I noticed a curious thing about BlackBerry News for the BlackBerry PlayBook: it was living in the past. Restarting the app and then the PlayBook did no good. The application simply refused to show any articles posted later than July 31, 2011. As to why, I couldn't tell you. Perhaps the app just couldn't come to grips with the fact that Sunday would have been Harry Potter's 31st birthday.

Today, Research In Motion quickly fixed that bug by releasing version 1.0.0.91 of BlackBerry News for the PlayBook, specifically to fix the "known issue with timestamp." A quick download and BlackBerry News is working just fine.

If you're not familiar with the application, BlackBerry News is an RSS news reader that presents your feeds in a layout similar to a newspaper or magazine. It offers a much more visually appealing look to your news than the standard lists of lists. The tablet app also syncs to its smartphone counterpart. Something I missed on my first review, RSS feeds added using the BlackBerry News Feeds smartphone app will be added to the BlackBerry News app on the PlayBook and vice versa.

It's nice to see Research In Motion move so quickly to fix the date problem on BlackBerry News. It's good to know that RIM supports and stands behind even this humble (and Awesome!) application. BlackBerry News for the PlayBook and BlackBerry News Feeds for the BlackBerry Smartphone are available to users in Canada and the United States.