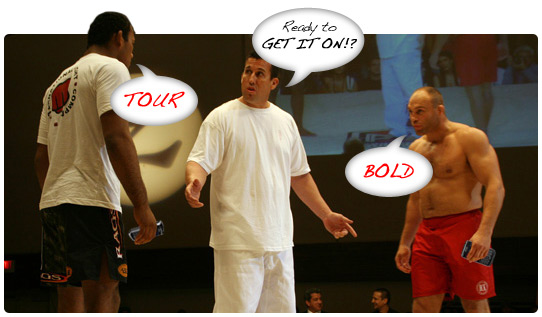 OK. Here's the deal. Some rumors popped up on the net that the much-anticipated BlackBerry Tour 9650 (Tour2 as many refer to it as), which at the minimum ads WiFi and an optical trackpad to the original Tour 9630, is no longer going to be released as a Tour but rather as a BlackBerry Bold.

I held off wanting to post on this because, well, unless I can personally confirm or at least get a much better feeling of what's actually going down surrounding a rumor like this, I'd rather not perpetuate it. Especially in a case like this where first hearing about it seems a little crazy, considering the fact RIM recently announced the BlackBerry Tour 9650 on Facebook (albeit accidentally), and any changes now are happening relatively last minute and not as initially planned. So taking some extra time to get things sorted, I feel a lot more comfortable relaying this info now. As far we now know, this is the deal:

Is RIM Going to Release the Tour 9650 as a Bold now? Yup. As strange as it may sound to some and make a ton of sense to others, it definitely appears that this is what RIM intends to do. At this point the change of branding decision is still pretty fresh and I don't think every detail is yet set in stone, so when it comes to the actual device model number we're not quite certain. Calling it the BlackBerry Bold 9650 wouldn't make a lot of sense, as that would keep the Tour's 96xx numbers alive and further confuse things even though physically it looks more Tour-like in the body, so I think there's a better chance we'll now see this new device hit as a BlackBerry Bold 9750 or something along those lines with in the 97xx series of numbers (or maybe RIM will keep it uber simple and it'll just be the Bold 9700, now available to Verizon, Sprint et al).

Why is RIM going to do this? To keep people from getting pi$$ed off. Look, the Tour 9650 is what the original Tour should have been. The Storm2 got WiFi and the Curve 8520 got the optical trackpad. Had the Tour 9630 just been a little less behind in the development/rollout cycle it would have and should have hit the market with both of these new features. Anybody who reads the comments or forum posts to any Tour2 story that has surfaced in the past few months can see the reaction that original Tour 9630 owners have - they are NOT happy. Nor should they be. When the new Bold 97xx hits Verizon/Sprint, original Tour customers will still be ticked off despite the branding change, but this way there is now more distance from this issue for RIM and the carriers to fall back on (and no need for carriers to provide some sort of incentive to Tour1 owners to upgrade for less to a Tour2). The Tour name likely dies, it keeps RIM's brand lines from splitting equity and fragmenting too much, and as a further benefit there is no issue of the Tour2 being what the Tour1 should have been since it's now a different device and is the new Bold. It's a little sad and confusing, but also very logical at the same time.

So that's it. See ya later Tour, hullo CDMA Bold. As for release date, I was originally hoping/thinking we'd see the Tour2-gone-Bold get announced sometime between Mobile World Congress (ended last week) and CTIA (end of March/beg. April) but now I'm thinking it'll happen sometime between CTIA and WES (end of April). Either way, it's not too far around the corner, so I guess we'll know soon enough just how this plays out.

So what do you think of the name change? Like it? Love it? Sensible? Senseless? Sound off below in the comments!