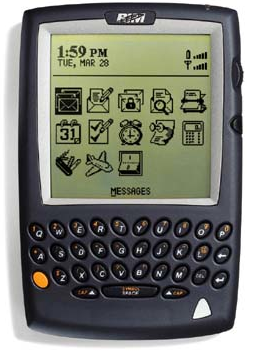 First loves. No one ever forgets them. Whether it's your first girlfriend or boyfriend, first car or first pet, you rarely ever forget that experience and what it taught you along the way. But I'm not here to reminisce about old flames and puppies; this is a BlackBerry site after all. When Kevin gave me the opportunity to contribute to the blogs here, I thought the most appropriate thing to do was to introduce myself by gushing about my first BlackBerry and how I got addicted. So, I'm here to talk about my first BlackBerry love (which you'll find wasn't technically my very first device), what I went through along the way, and how I came to love our favorite brand of smartphone.

To be honest, it took a while for me to get on the BlackBerry bandwagon. I first started hacking dumbphones as much as you possibly could before getting fed up and wanting more. My first official smartphone, if one could even consider it that today, was the Nokia 6682. At the time, it was more advanced than other phones I'd owned and I could manipulate all kinds of things by plugging it into my computer. I even used it to tether my laptop, too.

A beautiful device, but it wasn't for me

Then, one day, I saw a BlackBerry for the very first time attached to some corporate guy's hip. It was clear that he was just stepping out of the office for a quick cigarette fix and wouldn't have much time to talk about it, but I did manage to ask what it was. "It's a BlackBerry," he said, and went right back to his cigarette. More precisely, it was a BlackBerry 7290 and I was fascinated by the fact that it had a full QWERTY keyboard and a slick holster. (For the record, I don't wear a holster; never have, never will.)

I popped into my local carrier, then Cingular, and decided to check one out for myself. My first thought was, "Why would anyone want a full keyboard on a phone? It would be slow and impossible to type on this thing!" It's funny looking back, isn't it? Still, having e-mail access on a phone was so new and appealing to me at the time that I went ahead and bought it. I brought home my shiny new toy, plugged it in and started getting to know the device - but alas, this BlackBerry wouldn't be it.

Whether I was stubborn and refused to become acclimated to the new OS or it was a quick surge of buyer's remorse, the 7290 went back to Cingular two days later. It would be a while, until the 8700 came out, before I was back on BlackBerry. For good.

Minutes after I brought her home - love at first sight

After my almost-one-night-stand with the 7290, I switched to T-Mobile. The coverage was much better where I lived and the plans were significantly less than Cingular at the time, and that's when I spotted the BlackBerry 8700g in dark blue (which admittedly was far more attractive than Cingular's grey, in my opinion). I loved how it felt in the hand: sturdy, solid and bulky - it wasn't a wimpy phone by any means. The colorful screen was vivid and vibrant, more so than the backlit display of the 7290. I was far more excited over the 8700g than I was with the 7290, so I bought one right away and went straight home to play with it.

"This thing feels like a tank." Those were my first words when taking it out of the box. I just knew I had a well-built device in my hands. My reception was crystal clear, voice calls sounded great and e-mail worked like a charm. I'd never been so excited about a piece of technology in my life, and honestly, I haven't looked back. There were moments when I had some doubts and I lusted after other phones, but once I discovered BlackBerry Messenger and really started using it, that was that. Game over. BlackBerry was definitely for me.

Over the years, I've collected BlackBerrys like you wouldn't believe. It was nice to be there for the transition from jog wheel to trackball to trackpad. New and old, I've had them all except the Storm, but we'll not get into that. Some of the devices I have don't even work anymore, like the BlackBerry 957, but I keep it around because it makes me feel like I own a piece of history.

BlackBerry culture is just as fascinating as the devices themselves and having a community like CrackBerry made my addiction that much more intense. Whenever I had a problem or glitch, the forums here was the first place I'd search. (What first brought me to CrackBerry as a lurker in early 2007 was the flashing red indicator on my 8700 going off when all my messages were already read. It was annoying!) And when I was hungry for gossip and rumors and new device pics and videos, the blogs kept me sated.

Now you know my story and how I came to getting my first BlackBerry. I hope you'll share your first BlackBerry love stories because I'd love to hear them. And while you're at it, let me know how you found your way to CrackBerry, too!