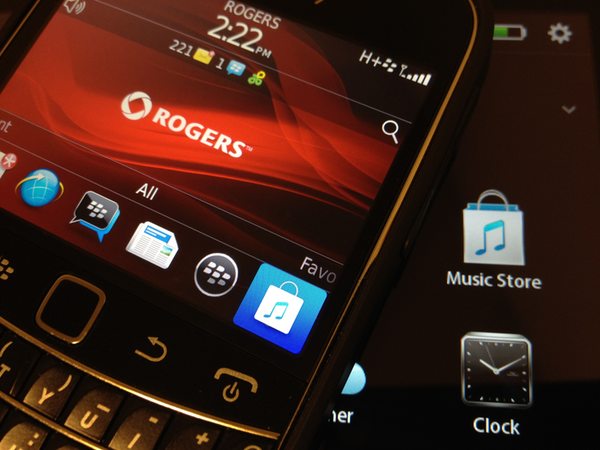 Despite it being preloaded on BlackBerry 7 devices, those of you who tried out the app may have found that it was either not supported in your country (This app, only has support for Canada and Australia) or even got an error message stating it was disabled by your administrator. If you fit into that area, then the newly released version is the one you'll want to get your hands on. You see, Amazon MP3 powered the old version where the new version is essentially a front-end for the 7Digital music store but it's much more then that when you consider a few things.

For a while now, I griped about the inconsistency of a music market place on the PlayBook and BlackBerry 7 smartphones due to the fact the PlayBooks music store was powered by 7Digital but BlackBerry 7 devices were powered by Amazon MP3. As such, any music you purchased on your PlayBook wasn't easily retrieved on your BlackBerry smartphone. You could get it, but it was through the 7Digital app, which has a totally different icon and is a totally different download. Some folks, may not have ever even known there was a 7Digital app or site and went on thinking their purchased music was stuck on their PlayBook.

With the BlackBerry Music store now available as a separate download, being powered by 7Digital (like the PlayBooks music store) RIM finally has some convergence happening and almost a complete music ecosystem. Files bought on your PlayBook can be retrieved on your smarphone and vice-versa as they are both on the same system now. BBM Music is of course the last remaining piece of the puzzle since; music you purchase there cannot be accessed outside of BBM Music easily without some digging around (It uses Amazon MP3 still). But that leaves the door open for RIM to port BBM Music over to the PlayBook at some point ideally or come up with a different solution for moving the music about easily.