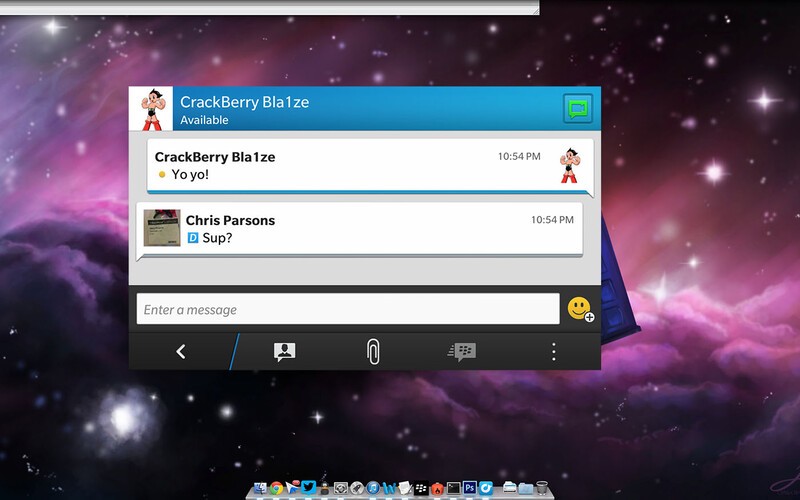 If you've been paying attention for the past little while then you already know BlackBerry Messenger is getting ready to go 'cross-platform' though arguably, they'll need to support more platforms than iOS and Android before it's really considered cross-platform. But what if that was already in the works? No, I'm not talking about Windows Phone but instead, something much larger. Your desktop. With BBM Channels already being web based, it would seem as though the time is right for BlackBerry Messenger to make the jump to the desktop and really make a huge splash with their cross-platform support.

For years now, BlackBerry users have been asking about a desktop version of BlackBerry Messenger and while there has been some implementations that allowed for it to happen through some software, it always came at the hands of third party developers and because of that it never really took off and was never really maintained through the recent OS changes. But what if a solution came directly from BlackBerry themselves? It would be better maintained as BlackBerry would be in control of it all.

The old rumor goes that BlackBerry has had BlackBerry Messenger somewhat working internally for a long time now, whether or not that's true, we may never know. What we do know though is that new rumors are suggesting they're working on something possibly for BlackBerry 10.2 that would bring BlackBerry Messenger along with SMS/MMS to the desktop. Although it's been largely overlooked in the BlackBerry 10.2 leaks there is some new apps showing up in the OS, one I've mentioned before by the name of ChatBlend.

That is what we've been hearing what will ultimately be the BlackBerry Messenger/SMS/MMS solution on the desktop. How it'll all work, we're not sure but it seems as though it may still require a USB connection in order to essentially 'mirror' the content onto your computer and allow you to interact with all your contacts that way. Not necessarily unlike solutions that came before it.

I've torn through the files a bit and there is some obvious stuff in there such as a new messaging icon, references to SMS, PIM data and some layout of the UI but other than that, it's all a bit vague almost like it was intentionally stripped out. With all that said, you obviously have to take this all with a MASSIVE grain of salt until it becomes a reality but the thought of finally getting BlackBerry Messenger on the desktop is very pleasing to me even if these particular files have nothing to do with it.

What do you all think? In my opinion, BlackBerry Messenger should have been made available on the desktop years ago but due to whatever constraints it never really happened. Would you actually use it if BlackBerry did offer it? I know I certainly would. I have no shame in saying I'm slightly lazy and when I get a BBM message, it would make me more likely to reply if I could do so from my desktop vs. picking up my device, unlocking it, opening BBM and messaging whoever back. Plus, with BBM Channels now available, it starts to make even more sense for it to happen. Sound off in the comments.