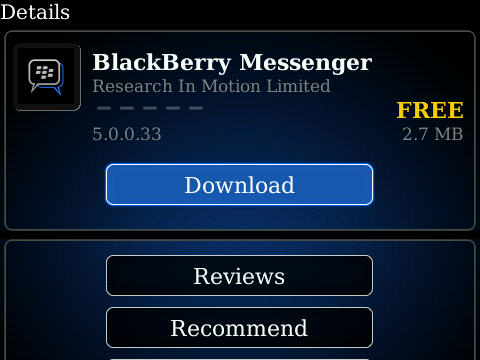 We knew it was coming as we saw this email drop to some partners earlier in the week, so it was just a waiting game. A lot of you have been playing around with leaked versions of BBM5 and never wanted to see a standard BBM version again - well now you don't have to! BlackBerry Messenger 5.0 is now officially available in BlackBerry App World for devices running OS 4.5 and higher. Check out the link below to download. As for what's new in BlackBerry Messenger 5.0, here's the quick summary:

* Note: While BBM 5.0 will definitely work on official releases of OS 5.0, we're not sure yet as I post this if it will work on previously leaked versions of OS 5.0. Be sure to report back in the comments if you're having success or not, and back up your BBM contacts before upgrading. *