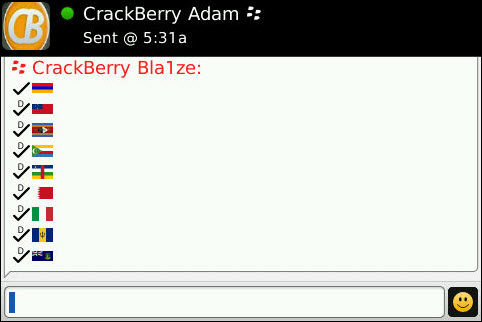 If you are amongst the swarms of people who have downloaded the leaked versions of BlackBerry Messenger 5.0 then you will surely have noticed the Canadian and American flag that now show up as "smileys". But curiously other country flags are missing and after I had installed BBM 5.0 I began to wonder why such a worldly device would leave a lot out. I just chalked it up as maybe it's a localized thing and more will show up later on as official releases get pushed out.

Then, while checking on Twitter last night I was forwarded a message from @PatWallace by @phishgirl3 that shows how to access different country flags within BBM 5.0. Technically, the smileys are just letters and numbers and @PatWallace found by using different letters you can find different flags.