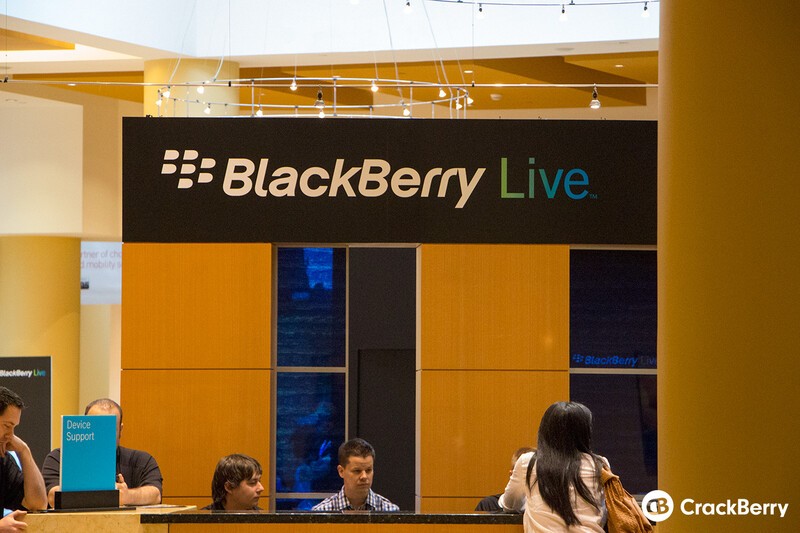 The CrackBerry crew just wrapped up their first day at BlackBerry Live 2013, and even though things don't get officially started until tomorrow, there was still plenty to do. I didn't get in until the late afternoon thanks to a missed connection on Sunday resulting in an impromptu roadtrip from Tampa to Orlando with some nice guys from BlackBerry and BitHeads, but from what the guys tell me, the morning had plenty of attendees coming in and getting ready for a busy week.

By the time I got to the World Center, CrackBerry's show floor presence was already well-established.  We had tables set up across from registration with all of the power and fat internet pipes we would need for our dozen team members at the show. TVs, a backdrop, and stage were already set up, and before long our buddy John Pozadzides showed up with an arsenal of video equipment.

After the cameras were all in place, Kevin and Adam took to the intertubewaves with CrackBerry Live - our biggest, most ambitious video project to date. They went through the usual pre-show banter, but also pulled in attendees from BlackBerry Live. These included many recognizable faces, though there were new friends made too. All-in-all it was tons of fun and we're totally pumped about keeping things rolling throughout the show. Don't worry if you miss the stream, we'll be chopping up the good bits and uploading clips shortly.

Enough about us - what was everyone else up to? Well, there were a few sessions going on already, and folks were eager to crack open their brand new BlackBerry Z10s being doled out by BrightStar. The evening reception gave us a peek into the Solutions Showcase, where we got some time with some BlackBerry Q10s from T-Mobile and Sprint. It's looking like AT&T is going to be showing off theirs tomorrow too, since there's a big banner for it on the way to the showcase area. There weren't many surprises to be had on the device front though, especially since the units being shown off weren't proper retail models. With any luck, we'll get some more information (particularly on release dates) tomorrow.

Now, I've been to a few BlackBerry events in my time, and I've got to say that the turn-out so far is looking really good. The welcome reception area was way busier than I remember it being, and there were a ton of exhibitors to take in. Between the keynote tomorrow morning, more CrackBerry Live goodness, more exhibitors to scope out, and lots of sessions to sit in on, it's going to be busy here on the blogs. To match all that activity, expectations are high - folks are hoping for everything from BlackBerry 10 on the PlayBook to an R10 announcement to Instagram support.  Get ready for the rest of the week guys, the ride's just starting.