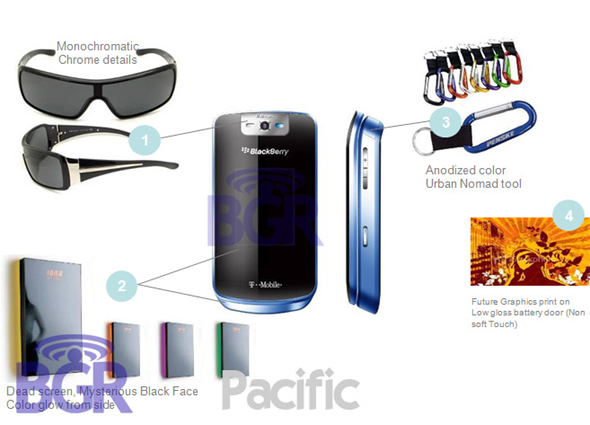 You may want to take this news with a grain of salt. I know the first time I heard this information I was skeptical. Then I heard it again, and again and again. And now that I've heard the same bit of news from multiple sources / informants / ninjas / tipsters / little birdies I can't help but believe it to be true. So to the best of my knowledge...

the BlackBerry KickStart will sell on T-Mobile for $49.99!

50 bucks on a standard 2-yr contract and T-Mobile is apparently aiming for an early-September launch. We've known for a while now that the KickStart will be a low-cost entry into the smartphone market with a real consumer focus (lots of accessories and doodads to dress it up), but I for one wasn't expecting the low-cost to be quite that low.

At $50 the KickStart becomes a Palm Centro killer and a viable option to all of those current feature phone users out there looking to upgrade but are not quite ready to endure the $100 - $200+ sticker that is typically attached to a full-blown smartphone. $50 is CHEAP. Let's hope this info holds true as it will mean GREAT things for RIM.

As more photos of the KickStart have surfaced in recent weeks, it seems to me that people have become a little less excited about it. This pricing makes it a whole new ball game, so allow me repose the question... At $49.99, is the BlackBerry KickStart a Yay or Nay? Beauty or Beast?

Other BlackBerry KickStart Links of Interest: