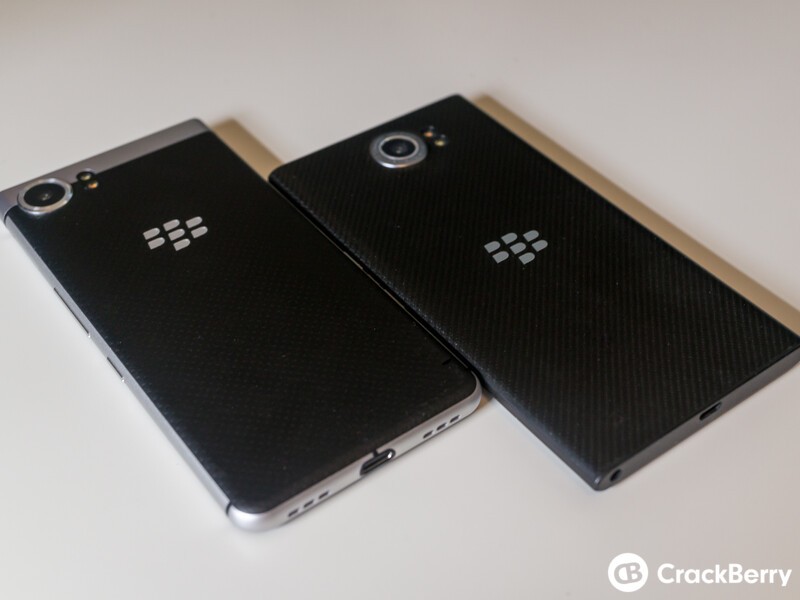 Editor's Note: This article was originally published by Android Central on May 4, 2017. We have posted here as it is also of high interest to CrackBerry readers such as yourself.

An Android phone with a keyboard is a niche product. I think everyone knows it, including the company that makes them. But because the choice is so small (as in just one) it's important you make sure what you're buying is good enough to replace what you already have.

We'll tell you up front that the BlackBerry KEYone is a much better phone than the BlackBerry Priv, and we'll explain why we think that way if you need more convincing.

The KEYone is a really well-built phone. Not just a well built phone among phones with a physical keyboard but well-built in general. It's hefty and thick by today's standards and is a glorious mix of metal, rubber, and glass. And keys. It's solid, and when you compare it to most other phones on the market you get the impression that it will last forever.

The KEYone is a solid phone and you know it as soon as you pick it up.

This is a stark contrast to the Priv, which came in two flavors: Built fine, or really wobbly and creaky. I got lucky and mine doesn't suffer from a clicky back cover or a loose keyboard slide, but even then it's easy to see that the KEYone is using better and thicker metal and it's put together more solidly.

A big part of the reason is that the Priv was a slider. You had the full-screen experience and a flick of the thumb revealed a BlackBerry keyboard. The KEYone has none of the inherent problems a slider has because it follows the typical BlackBerry look with a screen that only covers three-quarters of the face, with the keyboard itself taking the remainder. I'm a fan of the slider, in theory anyway. But I'm more of a fan of how well built the KEYone is.

Everything inside the KEYone is also a huge improvement over the Priv. And it shows, especially when you're doing all the BlackBerry things this BlackBerry was designed to do.

The KEYone's hardware is just enough, which is something the Priv wasn't able to say.

Where the Priv would slow down when you started to do several things on at once, the KEYone will keep on truckin'. Don't assume the KEYone is infallible and will run as well as a Google Pixel because it doesn't. BlackBerry didn't put the very latest and fastest processor or memory modules in the KEYone so you'll still hit a wall if you try to hit one with all the BlackBerry services and any other app you can think of running. But that wall is far beyond the capabilities of the Priv.

While the KEYone would not be my first choice for playing 3D games or using any other really processor-intensive application, you won't have the problems watching HD video or web browsing that many Priv owners complained of. Temper your expectations, or just buy a Galaxy S8 if that's what you like to do with your phone.

Chances are this is why you're here. If you're using a Priv in 2017, you're doing so because of the keyboard. The good news is that you'll like the KEYone's a lot more.

The keyboard on the Priv was flat. A textured corner on each key was all that let your thumb find them and the only reference was a raised dot on the D key. The only thing that made the Priv keyboard great was that it was the only Android phone to have one. It took a long time to get used to it and become thumb-typing proficient.

The BlackBerry keyboard of legend still hasn't returned with the KEYone, but it's close. And for this keyboard lover, it's almost better.

You won't find a better physical keyboard on a phone in 2017 if that's what you're looking for.

The Keyboard is made of flat keys with a slick coating, but each key is raised out of the body and has a distinctive beveled edge. Even the hardest thumb can find them, and because they are nice and flat the gesture and swipe typing on the keys is great. It's clear that the Priv keyboard was studied so someone knew what mistakes not to make.

If you want a phone with the best physical keyboard possible, you can stop reading and order a KEYone.

Much of what can be said about the keyboard can be said about the small details. The KEYone has better buttons (no more three-button silliness like we saw on the Priv) a better screen and a better camera. Even the rubberized back is better on the KEYone and feels like rubber instead of a pool liner. Add better speakers and a USB-C port (complete with Qualcomm Quick Charge 3.0) and this becomes an easy choice. Mostly.

The Priv does hold its own in the call quality department.

There is one thing the Priv does better, and it may matter to you. The Priv has better reception than the KEYone in every test I've tried. The Priv is better on T-Mobile and AT&T, as well as MVNO carriers that use either network. In the same place at the same time, noticeably better. Where I live, work and play the KEYone is acceptable when it comes to connection strength and not the worst phone I have here. But it doesn't see the downright awesome signal strength you might have noticed from your Priv. If you need a phone that works well as a phone (the difference in data speeds was negligible at best) and you live on the fringe of coverage, you may have issues you didn't have with your Priv.

That aside, and for most users with good coverage I don't see it being a show-stopping issue, the KEYone beats the Priv in every possible way when it comes to the hardware.

The KEYone ships with Android 7.1.1 while the Priv runs Android Marshmallow (6.0) with no confirmation that it will receive an update to Nougat. For the most part, this means less for BlackBerry's phones than it does for some other brands because all models are updated monthly with the latest security patches, and unlike phones direct from Google, the software experience doesn't depend directly on the version number.

Android on the KEYone is very much like Android on the Priv. BlackBerry has both phones full of their own apps and services so application updates for things like BlackBerry Launcher mean the user-facing differences are hard to find. They are there, and from a security perspective one can say that the KEYone is superior, but most users won't find any big differences when it comes to the software.

The Priv and the KEYone run different versions of Android, but most people would never know it.

But you will find those differences when using the software. And we don't mean the small extras like better battery statistics that are a result of having Android 7; we mean that the BlackBerry suite of apps is a lot more usable on the newer, faster hardware.

BlackBerry Hub is a good example here. It looks the same on both phones and offers the same features, but the strain on the processor could make the Priv stop for seconds at a time. You won't find that with the KEYone. While you can tell the difference between running the Hub and not running the Hub, it's not a deal breaker. And since BlackBerry loves to update its software, chances are things will get better as time goes by and the "microstutters" may disappear altogether. A lot of Priv owners accepted the tradeoffs that using the Hub and the rest of the BlackBerry apps brought with the Priv, and the good news is that all of them are far less obvious with the KEYone.

Users who forgo the BlackBerry apps may not notice any software stutters with the KEYone, depending on what other apps they might be using. The same could not be said for the Priv.

Besides the improvement in responsiveness new processors and faster memory bring, the improved keyboard makes using BlackBerry's apps more enjoyable. Tapping a key shortcut to launch an app or entering a text shortcut so you don't have to type your address is a better experience when it happens almost instantly. BlackBerry has baked the keyboard into the entire experience, and improvements mean all the software benefits.

Photographers will love the improved camera in the KEYone. There are phones you can buy that take better pictures, but the jump in quality from the Priv is instantly noticeable. Photos that were marginal with the Priv's 18MP camera can be great using the KEYone's 12MP camera. And if you take your time and work at it, you can take some stunning photos with the KEYone.

Battery life on the KEYone has been better than anyone expected.

Possibly the biggest improvement that comes with the KEYone is the battery life. The Priv was acceptable at best when it originally launched and did not age well. We're not sure if the software was at fault or the hardware (likely a combination of both) but, regardless, the battery life on the KEYone is much, much better. And that's not just me talking, either. A quick with everyone here at Mobile Nations with a KEYone about every possible thing we didn't like (that's how reviews get made, we look for the bad things, too) and nobody had anything bad to say about the battery life.

With light use — phone calls, messaging, a little social media and looking at pictures of a new baby — the KEYone is almost a two-day phone. That's with all the things happening and not managing the battery at all. A cautious user who will mind how the battery gets used might stretch that out even further. As expected, you can kill the battery if you try, and I recommend you find your favorite Brick Breaker clone and do so every now and then.

Sometimes it's hard to decide if you should ditch a phone you've already paid for and buy a replacement. This isn't one of those times. Not even close.

If you have a Priv, or had one and liked Android with a keyboard, the KEYone is for you. We can't think of any reason not to upgrade if you're considering it and think you'll like what you see.

Linux Professional, aging hippie, and recovering engineer. Editor in charge of touching things until they break, trying to figure stuff out, and talking about Android at Android Central. I think the black jelly beans are the best and wear sneakers I bought in 1996.