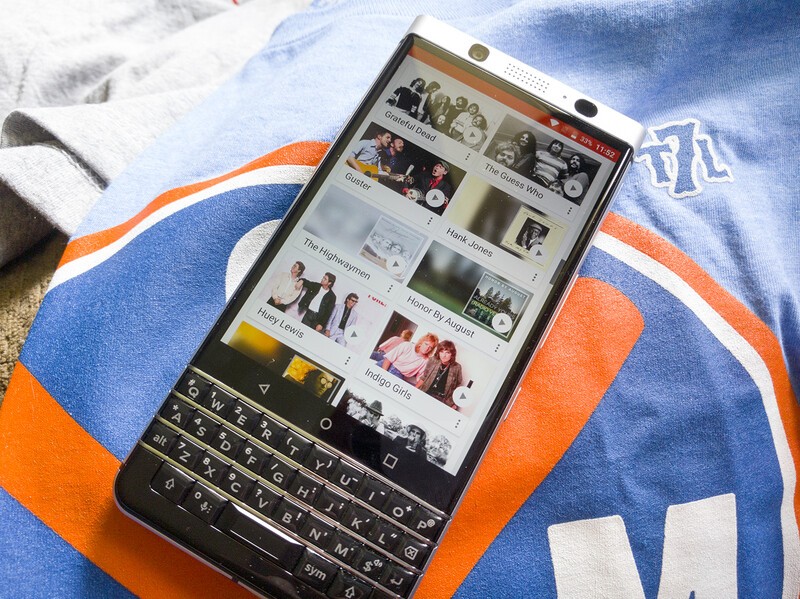 If you're a new Android user or convert from another platform, seeking out a great music player for the BlackBerry KEYone can be a very daunting task. There are literally hundreds of different music apps available on Android — from simple MP3 players to more advanced streaming apps that include not only music, but also podcasts, radio, and much more.

This is a staple on Android — obviously — and just keeps getting better. You'll have to pay a monthly fee to use the service, but you'll get access to a slew of music, radio stations, podcasts and more. The app lets you stream to your heart's content and also download tracks for offline playing. A single-user account is $9.99 a month, with a family plan available for up to six users for $14.99 a month.

Though many people think this one is just for iOS — Apple Music isn't just for Apple devices. It's very similar to Google Play Music though, offering streaming from a huge library of artists, as well as exclusive Apple Music radio stations. If you're an iTunes user (or were in the past) Apple Music also lets you stream any of your iTunes content without a hitch. Plans are $9.99 a month for single users or $14.99 for a family plan.

Spotify is perhaps one of the most well-known stream services there is — and for good reason. It's been around for quite some time and is still one of the best in the biz. Spotify gives you access to an expansive library of artists and can sync your locally-stored music. You can use Spotify for free if you don't mind some ads, while premium accounts for single users or family are $9.99 or $14.99 respectively.

If you don't want to go all-in with a streaming service, that's cool too. There are plenty of players that let you stream from other sources or just play your MP3 collection. There are literally hundreds of music applications for Android, but here are the ones that are better than most.

Phonograph is a no-frills music player with just the right amount of features for most users. Though it's still in beta form, it's already pulled in loads of Android users with its simple Material Design layout and simple controls. Phonograph has all the standard fare — playlists, widgets, lock screen controls and more. Best of all it's free (for now at least).

Pulsar is a simple player that supports mp3, flac, ogg, wav and more. It's sporting a great Material Design interface and has features that include smart playlists, Chromecast support, Last.fm scribbling and various themes. Pulsar comes in a free version with access to 3 themes, or a paid version with more features.

Poweramp has been around for years and is one of the best rated music players for good reason. Poweramp will play all of your music including mp3, mp4/m4a, ogg, flac, wav, wma, and more. There are loads of settings within the app to tweak your music just how you like it, and some cool widgets to throw right on your home screen. A free 15-day trial is available, but after that you'll have to pony up $3.99 for the full version.

BlackPlayer is free and awesome and one of the fastest music apps you'll find. It supports all standard file formats and has a built-in equalizer and 3D sound virtualizer. You can customize almost everything within the app itself and there are a variety of themes and widgets to use as you see fit. Best of all it's free!

These are just a handful of apps that we love for music on the BlackBerry KEYone — but not even close to everything. If you already have a favorite app that you don't see here, drop a comment to let us know what it is and why you love it!