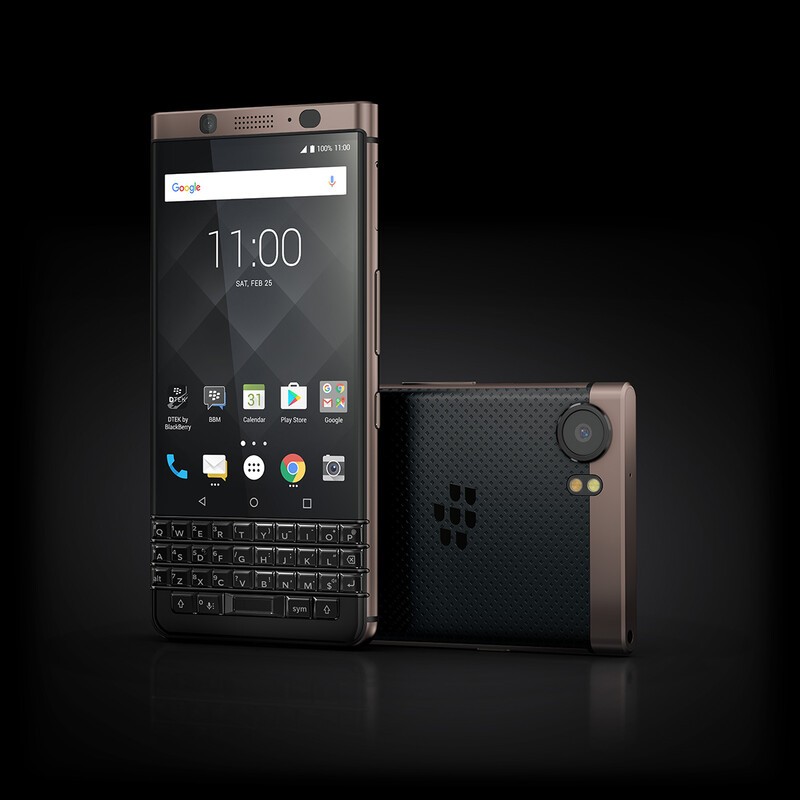 Following up on the success of the existing BlackBerry KEYone series, which is now available in 50 countries worldwide, including markets in North America, Latin America, Europe, Africa and Asia, TCL today at CES has announced the all-new BlackBerry KEYone Bronze Edition as an addition to the series.

Featuring a matte bronze finish, dual-SIM compatibility for select global markets, as well as 4GB of RAM and 64GB of internal storage, the BlackBerry KEYone Bronze Edition will be released in select markets across Asia, Europe and the Middle East.

Also announces U.S. availability of BlackBerry Motion and an all-new variant of BlackBerry KEYone for select markets in Asia and Europe

LAS VEGAS – January 9, 2018 – Building upon the successful global launch of the award-winning BlackBerry KEYone and introduction of BlackBerry Motion more recently to select markets, TCL Communication is preparing for additional portfolio expansion in 2018. This begins with the GSM unlocked BlackBerry Motion coming to the U.S. market beginning January 12, which will be available online at Amazon and Best Buy for $449.99 USD. Later in Q1 2018, an all-new color variant and dual SIM version of BlackBerry KEYone – Bronze Edition – will be released in select markets across Asia, Europe and the Middle East.

"BlackBerry phones are the world's most secure Android smartphones because we've designed security into every possible piece of software," said Alex Thurber, SVP and GM of Mobility Solutions, BlackBerry. "We are excited that TCL Communication has decided to bring the BlackBerry Motion with its outstanding battery life and its touchscreen interface to the United States, in addition to introducing a dual-SIM variant of the highly regarded BlackBerry KEYone for global markets. In 2018 we will be working closely with TCL Communication to roll out Android 8.0 Oreo, including additional security and other features, to continue to expand the overall BlackBerry smartphone user experience."

Since the global rollout of BlackBerry KEYone, which began in Q2 2017, TCL Communication has launched the device in over 50 countries worldwide, including markets in North America, Latin America, Europe, Africa and Asia. In fact, the global rollout continues with variants of BlackBerry KEYone newly released in Mexico and South Korea. This includes launching with key partners like AT&T, Sprint, Rogers, Bell, TELUS, Amazon, Best Buy, Vodafone, MediaMarkt, Orange, Carphone Warehouse, JD.com, Telefonica and many more.

The launch of BlackBerry Motion further diversifies the BlackBerry Mobile smartphone portfolio offering IP67 water and dust resistance and a new anti-scratch display technology for its 5.5-inch Full-HD screen. It also comes with the largest battery ever in a BlackBerry smartphone (4,000mAh), offering 32+ hours of mixed use. When a charge is required, Qualcomm Quick Charge 3.0 enables up to a 50 percent charge in roughly 40 minutes using a USB Type-C charger. Powered by AndroidTM 7.1 Nougat, this all-new BlackBerry smartphone gives customers access to the entire Google Play store and will receive monthly Android security updates. It will be upgraded to Android Oreo later this year.

New to this latest BlackBerry Smartphone is an improved customizable Convenience Key that brings even greater functionality and context to the quick-access physical key – unique to BlackBerry smartphones. This feature now includes four customizable profiles for Home, Car, Office and User, allowing for three different shortcut options that can be triggered by a home WiFi network, in-car Bluetooth, meetings that are synced to BlackBerry Hub or apps that are most commonly used.

For more information about the BlackBerry Mobile smartphones from TCL Communication, please visit www.BlackBerryMobile.com and come see us at CES 2018 located in Central Hall, Stand 12929.