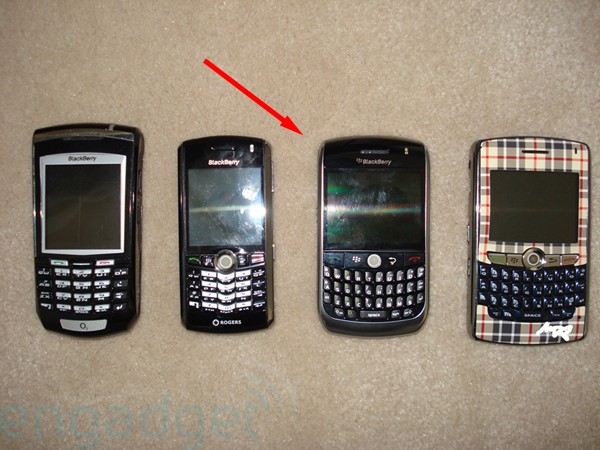 Take a close look. That is not a BlackBerry Bold the red arrow is pointing at. Rumors to date would say that's the 3G-less Bold-like BlackBerry currently codenamed "Javelin". Key specs:

This is what *should* be coming to T-Mobile *hopefully* in the near future! Another photo of Javelin after the jump, courtesy of the good folks at Engadget.

* Update * Looking at this picture again, it just struck me that the "Javelin" appears to be smaller than the BlackBerry Bold in terms of dimensions. Take a look again at the BlackBerry 9000 review I conducted and look at the comparison photos of the Bold beside the Curve and 8800. The Bold is actually taller than the 8800. [ view photo ] In the image above, the Javelin looks smaller than the 8800 (too bad there is no Curve in this photo to compare against). Maybe going 3G-less, swapping processors and getting rid of the "frets" between lines on the keyboard (like the Bold and KickStart feature) has allowed RIM to make the form factor more BlackBerry Curve-like. Indeed, the battery cover design on the Javelin is more like the Curve - charging pod contacts are now on the back and the device features the now-standard battery cover release. Can you say Curve replacement?! INTERESTING.