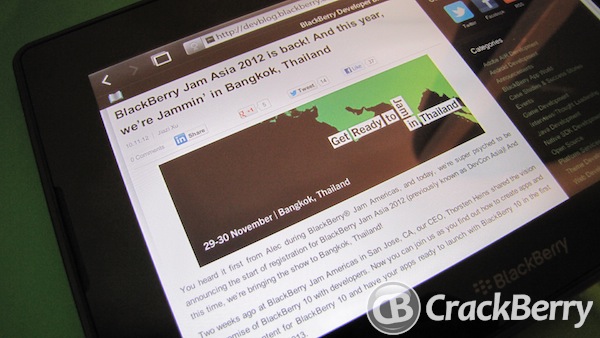 Registration is now open for BlackBerry Jam Asia 2012 (previously known as DevCon Asia) and this time around the tour will be heading for Bangkok, Thailand, There's a joke there somewhere but I shall keep things professional. The event will take place on 29-30 November 2012 at Queen Sirikit National Convention Centre and if previous Jam dates are anything to go by this one will be jam packed!

For developers the reasons for attending BlackBerry Jam Asia are pretty straight forward:

But as well as the above I have some important news for the CrackBerry Nation. We all know that in Europe - Mobile World Congress is the biggest industry related show - where everybody gets together to show off their new hardware. Well, I *think* I can exclusively reveal that attendees to the show will NOT find a BlackBerry booth there. Nobody panic - I shall explain why.

We all know that BlackBerry 10 was due to be released late in 2012 but we had the setback to Q1 2013. Partly due to this factor RIM has had no plans to attend MWC 2013 for a long time. There are many factors involved in the decision and although I probably don't know them all I do know quite a few.

Reason 1: Unless you have been blind for 2012 you may have noticed that RIM is doing everything possible to motivate and provide developers with the tools they need to get apps submitted for the BlackBerry 10 launch next year. We have seen the BlackBerry 10 Jam World Tour cover North America, EMEA, Asia Pacific and Latin America and now with further dates announced today for Thailand. With the added bonus of the new Tech Centre Porting Labs the support that RIM are giving developers really is 100%.

Reason 2: Out of the 5000 Dev Alpha devices handed out to attendees of the BlackBerry 10 Jam World Tour, over 20% of devs have already submitted applications for the BB10 App Store. Considering we are still a few months away from the new OS being released this strikes me as awesome news.

Reason 3: Thorsten Heins and the management team are working their butts off to close the gap between the company and the consumer, as well as developers. They have travelled the world promoting the upcoming new OS and even today Thorsten met with the leader of a developer group in Jakarta - If that's not dedication I don't know what is!

Reason 4: Cost - (although more than likely not a major factor) the type of money involved in attending MWC in full force is extortionate, and bearing in mind RIM's financial challenges over the last year to two who can blame them. If I was Thorsten Heins I could think of dozens of better reasons to spend the hundreds of thousands of dollars it probably costs to attend MWC and I fully respect his decision.

So the way I see it is that rather than RIM being at Mobile World Congress next February they are instead focusing on getting out on the road, meeting with customers and developers to ensure the future of RIM is positive. And it will be - I have 100% faith in Research In Motion. The success of BlackBerry 10 may not happen overnight but give it time and I foresee a change in the smartphone trend. You only have to visit our CrackBerry forums to see how interested Android and iOS users are about the new OS. Those users may not switch straight away but I suspect there will be many that do. And remember - RIM has shown us quite a lot of what BlackBerry 10 has to offer but there is still a tonne of other features that remain under wraps at the moment. And clearly I can't discuss what I know as i am in the *Circle of Trust*.

No MWC for RIM - No big deal. BlackBerry 10 will rock and that's final. (If you don't believe me, just ask Kevin's hair)