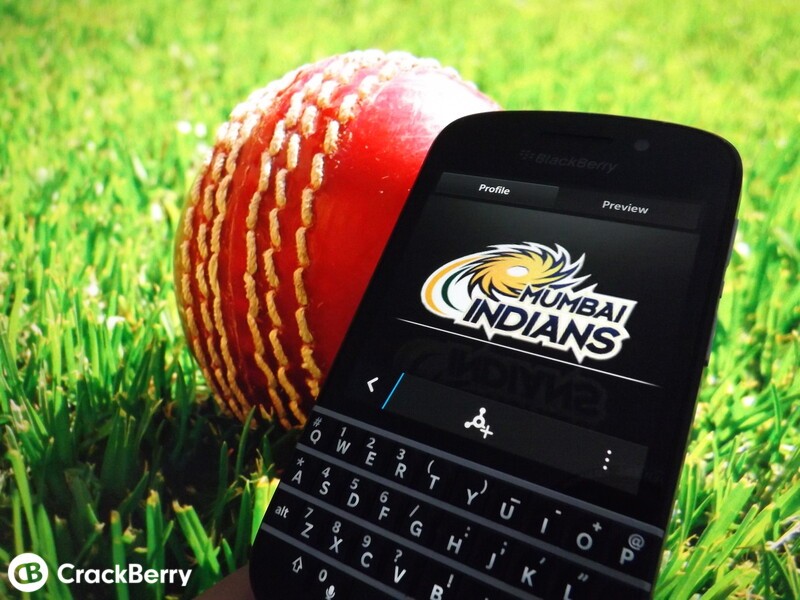 We've become accustomed to seeing BlackBerry branding over the last year with the Mercedes AMG Petronas Formula 1 team (and they are of to a flying start this season), but it looks like over in India BlackBerry are going to be sponsoring a sport the country are far more passionate about - cricket.

In conjunction with the new relationship, Mumbai Indians have set up their own BBM Channel where fans will be able to not only keep up to date with all the latest news from the team, but also some competitions. Even if you have friends using iOS or Android smartphones they too can get in on the action - just make sure they download BBM.

To follow the BBM Channel you can either jump into Channels and search for Mumbai Indians or use the PIN C004BB797.

Another great example of spreading the BlackBerry brand. Let's hope we see more deals like this in the future.

Mumbai, India – BlackBerry Limited (NASDAQ:BBRY; TSX:BB), a world leader in mobile communications, today announced its exclusive partnership with the champions side Mumbai Indian, a leading cricket premier league team April 16, 2014 for the forthcoming IPL season. As a part of the association, Mumbai Indians, one of the most celebrated franchisees of the IPL, launched an exclusive BBM Channel called ‘Mumbai Indians’ to engage and drive deeper connect with their millions fans and followers across the globe.

Commenting on the occasion, Mumbai Indian spokesperson said, “Mumbai Indians have always derived inspiration from its over 5.5 million fan support, who form the nucleus of our on-and-off field performance. Over the last four years, we have looked for innovative ways to connect and interact with our patrons and this year will be no different. The exclusive ‘Mumbai Indians’ BBM Channel presents an excellent opportunity for our fans to stay closer to their favorite team throughout the season.”

Mr. Krishnadeep Baruah, Senior Marketing Director for BBM Asia Pacific BlackBerry commented, ‘India is a land where cricket is one of the most widely followed sport. As Indians, we live and breathe cricket, and BlackBerry is thrilled to be the official partner of Mumbai Indians. We are hopeful that via BBM Channel, Mumbai Indian fans across the globe will be able to engage, interact and stay updated with their favorite team and its players.”

Riding on the IPL wave, BlackBerry has announced a number of exciting contests which will provide exclusive experiences to Mumbai Indians BBM channel followers. The contests will allow 11 lucky winners to watch the team practice from their dug out. There will also be contest give-aways such as autographed bats, tee’s and match tickets. BBM channel will allow fans to follow MI updates closely during IPL, experience exclusive content and have access to team members channel posts on given days.