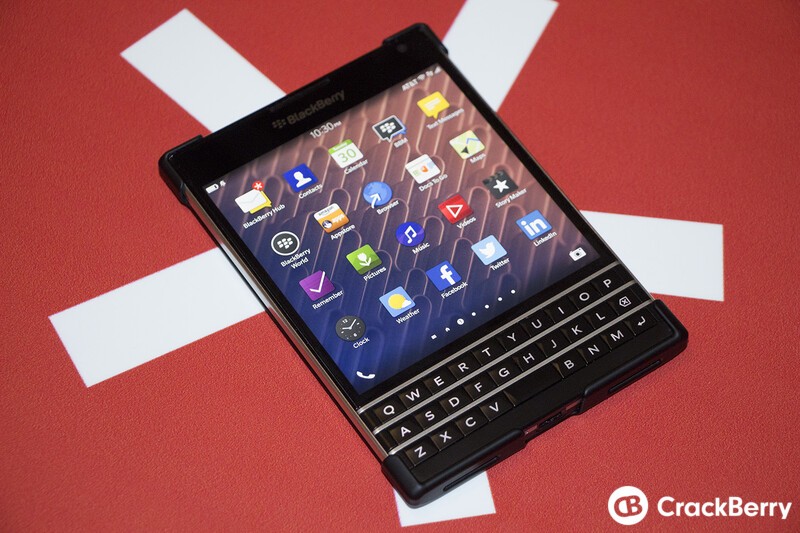 Since then, many folks have asked about it, and considering the fact I've been using it for a while now I figured I'd share some quick thoughts on it for anyone who might be considering grabbing one for themselves to protect their BlackBerry Passport.

If you do grab a hard shell case for your Passport, the first thing you're going to notice is the fact that it's not really heavy nor does it add any bulk to your device. It only weighs in at 19g and yes, even with the case on, your Passport will still fit in your jeans, shorts, and suit pockets unless those pockets are abnormally small. It might be a little bit harder to get out, due to the texture on the back, but it will still fit.

Speaking of the texture on the back, it shares the same design as the BlackBerry Z3, which isn't a bad thing. The tiny squares offer up a bit of comfort when holding the device, and it never really feels like your holding a square chunk of plastic. In fact, it feels rather rubbery to the touch, which is different from the soft touch finish of the original backing of the BlackBerry Passport. Plus, it helps you maintain grip on the device as expected. More so than the soft touch? Yeah, I'd say so.

Slipping the BlackBerry Passport hard shell case off and on is rather easy as well. Pretty basic, really. The edges of the case on the bottom stick out a bit more than the edges on the top so you just slide the bottom of your Passport into the bottom of the case and snap the top down into place. To get it off, you just reverse the motion and slide the top edges backward until the device lifts up. From there, you can simply just pull your Passport out.

As it is meant to be a pretty basic case for your Passport, you'll find it doesn't interfere with any of the spots you really need access to on a frequent basis. Your power button and headphone jack remain visible on the top and at the bottom you can access your USB/SlimPort slot without any hassle. Around the back, there's no blocking of that 13MP camera either as expected. One thing you won't have access to however is your SIM slot or your SD Card, so keep that in mind if you're constantly changing those on the go. That said, I think you might be hard pressed to find a case that doesn't block access to those given their placement on the Passport, right at the top.

The coolest part of the BlackBerry Passport hard shell case though is the fact it helps keep your display off of flat surfaces when it's face down. This ultimately serves a couple of different purposes. It keeps scratches and scuffs off your display, but you're likely asking, why would I place my device face down to begin with? That's stupid! Well, that's where the other part comes in.

BlackBerry 10.3 includes a few 'Advanced Interactions', two of which, Flip To Save Power (puts your device into standby to extend battery life) and Flip To Mute (silences incoming calls & notifications when flipped), require your device being facedown in order to work. The other, Lift To Wake (wakes your device up when lifted from a flat surface), doesn't require it but it's useful when combined with the others.

So you see, there's now several reasons outside of being polite and stopping your LED from flashing that one might want to put their Passport facedown. This case not only helps make it easier for the advanced interactions to work but also keeps your display safe while doing so. It's a pretty easy purchase decision based on that alone in my opinion.

Overall, the BlackBerry Passport hard shell case offers up some pretty solid, yet basic, protection for your BlackBerry Passport. It's not heavy; it's not bulky and best of all it actually helps with some of the functions within BlackBerry 10.3 should you decide to enable them. I'm generally not one for using cases but this one is just kinda there and I don't really notice it, which is probably the best reason for buying it outside of the obvious fact that if you don't have it and you drop your Passport in the wrong way, you'll be wishing you did have it. The BlackBerry hard shell case for the BlackBerry Passport is available now in on the ShopCrackBerry Canada Store and comes in either black or white and sells for $29.99 CAD.