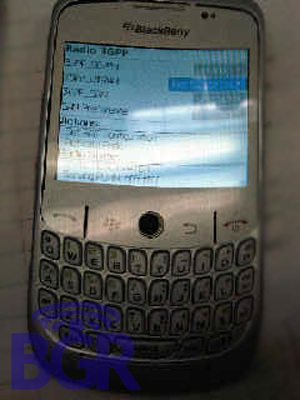 When it rains it pours! The Boy Genius just posted a sweet shot early this morning of one of the many new rumored devices in the BlackBerry pipeline, the BlackBerry 8325 "Gemini." You'll remember the Gemini codename dropped to the blogs a few weeks back among some initial confusion, but the quick concensus became that it was another "lower end" Curve. Looking at the photo above (which isn't some photoshop rendition of a photo of an image on a piece of paper lol) you can see that it kinda looks like the 8900 and 8300 Curve gave birth to something that ended up looking...well.. a bit weird (but we think there is an explanation for that!).

The re-capped specs according to BGR look like this:

Sounds about right! If you listen to the latest CrackBerry Podcast, you'll know we spent some time talking about the Gemini and the two coolest rumored specs about the Gemini haven't been mentioned yet.... one, that this device should have changeable face plates (no need for ColorWare, you'll be able to easily change up what your device looks like in literally a snap!) and two, this device should also debut with a new and improved trackball. Looking at the photo you can see how the whole area above the keyboard is made of one piece - the buttons tie into frame around the screen, which adds some logical visual proof that the faceplates will be easy to swap in and out. Word is the back plate can also easily be swapped. Whaddya think??

Now that we got a sneak peek (thanks BG!), lets hope the information keeps flowing as it has in the past where once a device shows up we get loaded with more details and better pics and hands-on reviews. I have faith in RIM not being able to keep their secrets hidden from the BlackBerry World for too long ;)