And you thought the love for BlackBerry in the United States had gone away? Think again!

For his entry into CrackBerry's What Would You Do for a BlackBerry 10 Phone? contest, Brian Heffren of Middletown, New York went out and got himself a BlackBerry 10 and CrackBerry tattoo! Hit the video above to see the crazy action go down.

Brian is an Engineer Technician and Field Planner for Time Warner Cable and has been in the industry since 1996, designing fiber optic routes and implementing them for commercial businesses. Brian also works on the LTE towers in his area.

Brian loves BlackBerry because it makes his job so much easier - from BlackBerry's great messaging capabilities to the PlayBook tablet which helps him do designs out in the field. A coworker showed Brian CrackBerry.com years ago and he's been hooked ever since. Brian's BlackBerry never leaves his side, and of course, his wife thinks he's nuts.

Heck, we think Brian is nuts (or maybe crazy?) too for getting a BlackBerry / CrackBerry tattoo, but we love him for it! He got the tattoo because he believes in BlackBerry and CrackBerry and is very passionate about both. Brian couldn't picture his life without a BlackBerry. He even loves doing repairs on BlackBerry devices - he'll buy old broken BBs and restore them. Now that's hardcore! 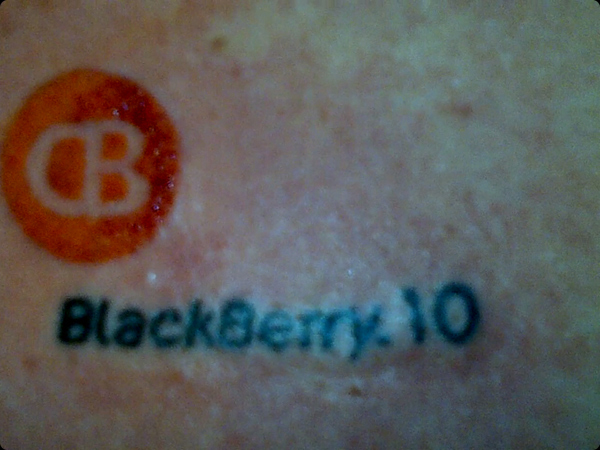 In loving memory of Herbert Geerdes...

Brian also let us know that his grandfather and best friend, Herbert Geerdes, passed over on Thanksgiving (Oct 5 1926 - Nov 24th 2012). Brian was hoping we could dedicate this post to Herbert. Absolutely.