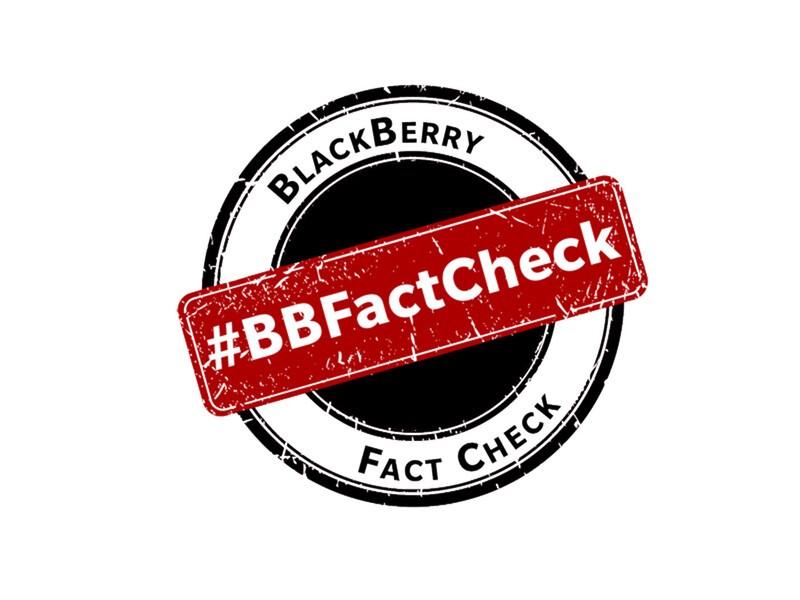 On June 26th BlackBerry announced, via a blog post, something they are calling a "fact check portal." Technically it's not a portal but a category under which they can file blog posts. We can call it whatever we like. Portal, category or even a dedicated blog … these are just labels. What matters to me is the content and how well they market it.

The very first blog post under this category was made by Mark Wilson. Recall that Chen hired Wilson away from enterprise voice giant Avaya where Wilson was the chief marketing officer. He had previously worked with Chen at Sybase. According to a story by the Globe and Mail Wilson emailed Chen to congratulate him on taking the CEO post at BlackBerry. Chen fired back a reply asking him if he'd be interested in joining the good fight. Wilson wasn't looking for a new job, but took the bait because he believed the turnaround was possible.

Since we've never seen BlackBerry do anything like the "fact check portal" before, and since Wilson made the first post, I'm assuming it was his idea. And I very much like the idea. Rather than just announce an idea and let it die, BlackBerry has already posted six times (aside from Wilson's introduction) under the "BlackBerry Fact Check" category. That's some great momentum out of the gate. I'm also seeing these posts referenced quite often in my Twitter feed and through Twitter search, which is a good sign that people are reading and sharing them.

So how can they improve the idea further? I'd like to suggest they move faster and give general employees broader ability to submit their own ideas or even write their own "Fact Check" posts.

As an example of speed let's just consider the entirely incorrect stories that were shared last week regarding Volkswagen allegedly taking over parts of QNX. How does a simple press release by Volkswagen, which just say they're taking over an R&D facility in Germany, translate into "BlackBerry sold QNX"? I think I can see how this happened.

The Globe and Mail ran this story on July 3rd. All of the information in that story is correct as far as I can tell. But because the story talks about the Volkswagen sale and then also talks about QNX.

I can understand how some people would form a totally inaccurate conclusion. Imagine I wrote something about the strength of my morning coffee and then tacked on a paragraph about how important I think it is to filter my water. People will start thinking I said that filtering water is critical to strong coffee. Most people jump to conclusions too quickly.

Let me be very clear: The Globe and Mail and several other news outlets that published similar stories, did not make inaccurate reports. But these reports inspired other, lesser quality reports including one from Seeking Alpha that was totally out to lunch in ways I won't express in words (because there would be a lot of cursing, and I do mean a LOT.)

Seeking Alpha accepts posts from amateurs who may not know what they don't know (unconscious incompetence, for those who care about the technical label). CrackBerry member xBURK suggested, in a forum post, that the company fact check one Seeking Alpha story from July 3rd. Yet it took until July 7th for the actual fact check post to go live, although I recognize it addressed a different article published July 6th. Still - there are tons of BlackBerry employees who read CrackBerry, and it was obvious on July 3rd that wrong facts were circulating about QNX.

How can BlackBerry speed up its reaction time and increase the amount of content it posts to its fast checker? Simple: Involve everyone in the company. Invite every single employee to write posts for the blog, should they want to. And at the very minimum have one person who is charged with vetting ideas that any employee (or interested party) can submit.

While Mark Wilson gave people a gentle call to action by saying, "If you see a work of fiction from one of our competitors, we want to hear about it. Tell us about it here." But he stopped short of giving people a mechanism to actually report stuff that needs fact checking.

All good marketers understand the importance of a call to action (CTA). I think BlackBerry needs to put a huge call to action button somewhere on the fact check portal and route all ideas to at least one person who is dedicated to this task.

If amateur writers (and some experienced ones who have a track record or mis-reporting things) knew they'd be called to the mat every time they reported garbage, I think we'd see much higher quality stuff about BlackBerry in the media.