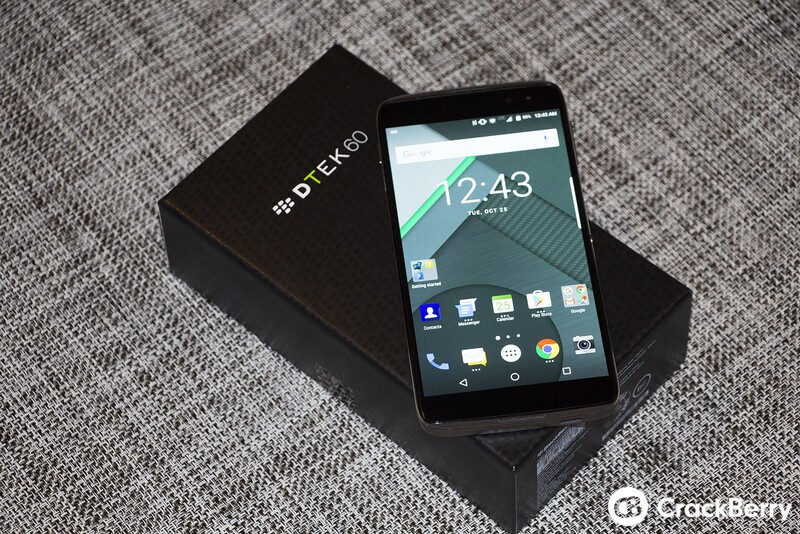 When the DTEK50 was originally announced, I admit my personal interest level in the device was rather low. After getting my hands on one, though, that changed. As it turns out, for me, the DTEK50 is great and I chose to use it over my Priv but as the news of a the DTEK60 started to eek out, I began to think about how I would like something similar to the DTEK50 only with higher specs. That's exactly what the freshly announced DTEK60 brings to the table and more. I've spent some time with the DTEK60, not enough for a full review as of yet, but enough to share some of my initial thoughts on the device.

Before we dig too deep here, let me just say one thing about the DTEK60, and that is that images no matter how good they are, simply do not do this device justice, especially if you're already familiar with seeing the DTEK50. Really, I'm sure many folks would be hard pressed to tell the DTEK60 from the DTEK50 at first glance. Being built by TCL, it does share a lot of the same aesthetics as the DTEK50 but make no mistake, the DTEK60 is more 'quality' feeling hardware and you know, bigger.

Looking at the DTEK60 sitting on the table, the 5.5-Inch display does give off a curved look to it but get it in your hands and you realize it's not exactly curved at all. Instead, the scratch and smudge resistant display drapes down ever so slightly on the sides to give the visual appearance of being curved. Making the colors pop is a 2560 x 1440 AMOLED panel which, for the PPI patrol comes in at 534PPI. I've yet to give it a complete run in the sun but from what I saw, it faired decently thus far.

Also on the front of the device is where you will find that red LED that will blink at you with new notifications. Yes, the red LED is back and it is no longer white. Still not RGB, but whatever. For your selfies, you have a very capable 8MP fixed focus camera which supports 1080p video recording at 30 fps and has a selfie flash to light up your wonderful face.

Like most times when you take a phone out of the box, the first thing I noticed is the weight of the DTEK60. After having been using the DTEK50 since I picked it up, the DTEK60's additional 30 grams in weight from 135 to 165g was certainly felt but not in a bad way. While some folks might have said the lightness of the DTEK50 made it feel cheap, the weight on the DTEK60, in no small part due to the glass back, adds to the feel of quality I mentioned earlier. Around the hardware, a lot of stuff is similar to the DTEK50.

On the right-hand side, you have your volume up and down rockers as well as your convenience key, which can be set to launch apps and more. Head to the bottom of the DTEK60 and this is where you'll spot something new to the BlackBerry world. No, BlackBerry didn't remove the headphone jack but they did upgrade to USB Type-C, which for some could either be a great addition or something they hate. Don't worry, there's also a USB Type-C cable in the box but if you want more or need a Quick Charge 3.0 charging block, you'll have to stock up on the right ones. Additionally, on the bottom is also where you'll find one of the dual-speakers. The other being at the top, which when combined sound pretty sweet but they'll require a bit more testing.

Flip the device over and head to the back and you'll spot that BlackBerry logo but chances are your eyes will be drawn to the shooter, which has a lot of goodies. 21MP Auto-Focus, Dual-Tone Flash, HDR, 4K video recording at 30 fps, Phase Detect Auto Focus (PDAF), you know, all the stuff that sounds good on paper, but until you really put it to the test doesn't mean much. Just to give you all a quick idea of what you're working with here, here are a few samples. For now, I'll just say everything looks pretty nice but again, more testing is needed here.

On the glass back of the device is also where you'll find yet another new addition to the BlackBerry world. A fingerprint sensor. BlackBerry has taken some shots for not having added one sooner to their hardware but it's here on the DTEK60. As expected, the fingerprint sensor brings added security for unlocking your phone, accessing Password Keeper, and even making purchases with Android Pay, if that's your thing. Personally, I'm glad to see it here if for nothing else, everyone can stop complaining about BlackBerry not offering it. You can add up to five fingerprints which are stored and encrypted through the software and in my testing, the fingerprint sensor here once set up is pretty quick, and doesn't flake out. Keep in mind, though, I have those soft blogger hands.

As expected, the fingerprint sensor brings added security for unlocking your phone, accessing Password Keeper, and even making purchases with Android Pay

Also, considering there's a lot of talk of the DTEK50 compared to the DTEK60 here, here's just a quick shot of them side-by-side so you can get a quick idea of the size differences. Also, you can tell that AMOLED screen on the DTEK60 is fresh.

When it comes to software, BlackBerry has kept everything mostly consistent across the board from Priv to DTEK50 to DTEK60. Mostly stock Android, no real bloat and of course, some BlackBerry software love. That being said, if you've used any of those devices you should be pretty familiar with their secure Android OS already. Out of the box, the DTEK60 is running Android 6.0.1 Marshmallow and as expected from one of the only companies who has been keeping lockstep with Google when it comes to security updates, it's already loaded up with the October security patch. Of course, it will be subject to BlackBerry rapid patching going forward.

BlackBerry has been working hard on adding new features and additions to their software.

With that in mind, I'm not going to go too deep here on the software side of things except to say that BlackBerry has been working hard on adding new features and additions to their software and with the DTEK60 you get the added benefit of it all being powered by a higher-end device. The Snapdragon 820 and 4GB of RAM really shines here and there's no obvious lag or stutter when opening apps and everything just feels as though it has been tuned properly for the DTEK60. A longer term playing around with things will reveal more but I don't expect any change in that area really.

Ah yes, since it was an issue with the DTEK50 that seemed to upset some folks, I'm pleased to report that if you're a fan of Picture Password, you will find it HAS returned on the DTEK60, so that's nice to see. A fingerprint sensor and the return of Picture Password. Awesome!

Right now, I'm really digging what the DTEK60 has to offer and feel as though it's a pretty complete package. As I mentioned earlier, the BlackBerry Android experience has been fine tuned and improved and continues to improve along the way. We're three Android devices deep now from BlackBerry and the DTEK60 is the second in the DTEK series and is being released as part of their transition towards a device software licensing strategy, which allows them to focus on putting the smart in the phone.

I'll continue to keep putting the DTEK60 to the test and will have a bit of a deeper review up in the coming days but for now, if you're interested in the DTEK60, the device is available to purchase from ShopBlackBerry.com in the US, Canada, UK, France, Germany, Spain, Italy and the Netherlands for $499 USD ($650 CDN, €579 and £475). I didn't talk about price, but you all can discuss that in the comments. Clearly, the Canadian pricing we saw in some of the leaks was bogus, which should make some people happier.