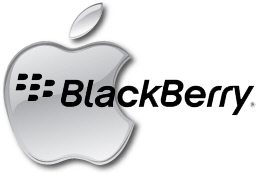 OK, so we have to mark this as pure speculation and rumor right now, but when I read the following forum post I just couldn't help but get warm and fuzzy feelings inside (and I'm sure all you other Mac users will feel the same way!) and just had to share it in the blogs:

"RIM working on a program for Mac users
Hi all. Spoke to a T-mobile BB rep yesterday and he told me that the BB rep was just in there and let them know that RIM is working on a new Desktop Manager for Mac. Finally!! Also, he doesn't know when it will be ready, but RIM feels that more people are going toward the Mac and so they feel it's worth it to come up with a DM for the Mac. Let's hope it's for real!!"

I hope this rumor turns out to be fact, and sooner than later. It's one of those things you just know someone at RIM MUST be working on. CTIA is coming up at the end of March...man o man would that be a great announcement from RIM - BlackBerry Desktop Manager for Mac. My fingers are crossed, though I'm guessing it's more likely to be announced at CTIA 2009 vs. 2008. :-)