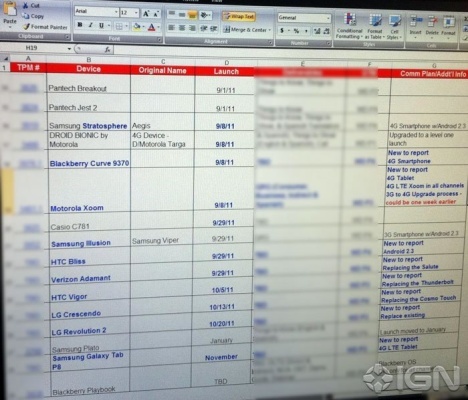 Amidst all these new BlackBerry devices being announced, we mentioned that the BlackBerry Curve series was missing and speculated on some reasoning as to why. It being the more cost effective device in the line up comes to mind first, with the other devices being top tier devices but walk with me here while we take a look at the latest leaked Verizon document.

It is of course littered with Android devices but if you look carefully you can see a BlackBerry Curve 9370 listed amongst the mix and looking to the far right, ignoring the launch date of 9/8/11 for a second you'll see a section that says "new to report 4G smartphone". Now, this could be a typo or it could be dead on accurate -- either way, it's interesting and has us rethinking why the new BlackBerry Curve devices were not announced like all the others.