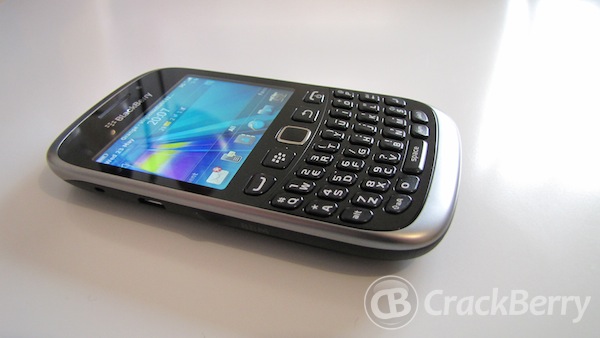 RIM is pumping out these new Curve models around the world. We've seen them launch in India, Indonesia, UK, Philippines and now it has made its way to Latin America. Both iterations of the new Curve line will be available come June. Differences between the Curve 9320 and the Curve 9220 are that the former has 3G, a camera with a flash, GPS and has the ability to act as a mobile hotspot, just like other BlackBerry 7 devices. Both come with BlackBerry OS 7.1 preinstalled.

Free applications will be available at launch, where customers can download a selection of apps, worth $25, free from App World. The offer is available until October 1st 2012 and includes favourites like Nobex Radio Premium, Screen Muncher and Photo Editor Ultimate.

Pricing details have yet to be announced, however these are hoping to be confirmed by mid June when carriers start to receive shipments.

Cartagena, Colombia - Research In Motion (RIM) (NASDAQ: RIMM; TSX: RIM) today introduced two stylish new smartphones for socially-connected customers in Latin America. The new BlackBerry® CurveTM 9320 and BlackBerry® CurveTM 9220 smartphones feature all the market-leading messaging and social networking capabilities that have helped make BlackBerry smartphones so popular in Latin America. Designed to be easy to use and easy to own, these new models also each offer the longest lasting battery life yet in a BlackBerry Curve smartphone, allowing users to make the most of their day.

"The BlackBerry Curve series of smartphones have been very well received by customers in Latin America as the best messaging and social-centric smartphones in the world," said Rick Costanzo, Regional Managing Director for the Americas at Research In Motion. "We have worked closely with our distributors and carrier partners in Latin America to make it attractive and easy for customers to own either of these two new BlackBerry Curve smartphones."

"The new BlackBerry Curve 9320 and BlackBerry Curve 9220 are designed for ease of use and convenience. They will be especially attractive to customers in Latin America who are upgrading to a smartphone for the first time, as well as existing Curve customers looking for a step up in speed and functionality," added Matthias Glanz, Vice President, Product Management at Research In Motion.

The BlackBerry Curve 9320 and BlackBerry Curve 9220 have everything a customer needs to stay in touch with the people and things that matter most to them. They offer the best keyboards in their class for quick and easy typing, and they even feature a new dedicated BBMTM key to bring the power of RIM's popular mobile social network up in an instant.

Customers can also easily interact with their social network in real time, using preloaded apps for Facebook® and Twitter®. In addition, the new Social Feeds 2.0 app is preloaded, allowing customers to post updates to multiple social networks simultaneously and capture updates from news sources (RSS), social apps and instant messaging apps all in one consolidated view. The integrated camera includes a flash(1) and supports video recording(2), and pictures taken with the Curve 9320 can be tagged with their location thanks to the smartphone's built-in GPS.

The new BlackBerry Curve smartphones also feature a built-in FM radio that allows customers to tune into their favorite local stations, and listening to the FM radio does not require a data plan or use data services. With the long lasting battery, customers can get up to 7 hours of talk time or up to 28 hours(3) of music playback or FM radio listening with headphones.

These new smartphones come with the new BlackBerry® 7.1 OS, which supports features such as Mobile Hotspot (Wi-Fi® sharing)(4) and Parental Controls, a brand new, on-device feature that provides parents and guardians with simple options to help protect children by restricting access to specific functions, features and applications.

Free applications for download
As part of the launch of the BlackBerry Curve 9320 and BlackBerry Curve 9220 in Latin America, customers will be able to download a selection of apps (worth US$25) on BlackBerry App WorldTM for free(5). The offer is valid until October 1, 2012 and includes a wide range of apps including utilities, games, music apps and more. Nobex Radio Premium, Color ID, Screen Muncher and Photo Editor Ultimate are just a few of the popular apps that will be available through this promotional offer.

Pricing and availability of the BlackBerry Curve 9320 and BlackBerry Curve 9220 smartphones will be announced in conjunction with RIM's distribution and carrier partners in each Latin American market beginning in June. For more information please visit: http://worldwide.blackberry.com/blackberrycurve/9220-9320

Forward-looking statements in this news release are made pursuant to the "safe harbor" provisions of the U.S. Private Securities Litigation Reform Act of 1995 and applicable Canadian securities laws. When used herein, words such as "expect", "anticipate", "estimate", "may", "will", "should", "intend", "believe", and similar expressions, are intended to identify forward-looking statements. Forward-looking statements are based on estimates and assumptions made by RIM in light of its experience and its perception of historical trends, current conditions and expected future developments, as well as other factors that RIM believes are appropriate in the circumstances. Many factors could cause RIM's actual results, performance or achievements to differ materially from those expressed or implied by the forward-looking statements, including those described in the "Risk Factors" section of RIM's Annual Information Form, which is included in its Annual Report on Form 40-F (copies of which filings may be obtained at www.sedar.com or www.sec.gov). These factors should be considered carefully, and readers should not place undue reliance on RIM's forward-looking statements. RIM has no intention and undertakes no obligation to update or revise any forward-looking statements, whether as a result of new information, future events or otherwise, except as required by law.