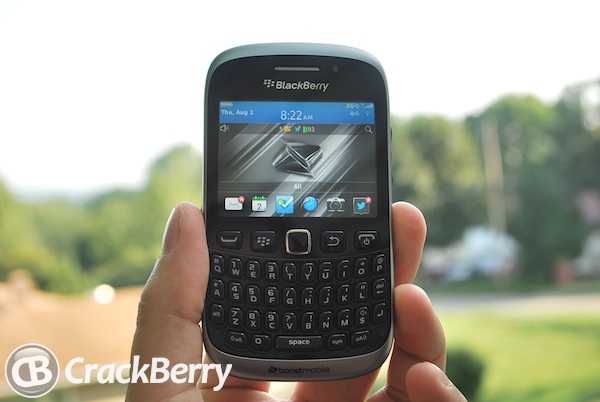 The Curve 9310 is a great device for those looking to go social. Its small size and classic keyboard will please both old and new BlackBerry users. It doesn't have the fastest processor, but it still hauls and never really lagged through normal tasks. With Twitter, Facebook, BBM and more this is truly a social BlackBerry. Boost prepay plans make it very enticing as well.

The screen resolution isn't the greatest, but those picking up the device simply for email, BBM and the like won't mind so much. I do wish the design carried a bit more onto the back of the device as the battery door feels cheap and unfinished.

I really do like the Curve 9310. I've always been a big fan of the classic Curve keyboard, so bringing this updated device to the party was a great move. Plus with Boost plans you can really get a great deal for service.

The device itself is small and light. I love the way it feels in the hand, and even those with a small grab won't have any trouble wrapping their fingers around it. The rubberized bezel provides for good grip on all sides. I'm a fan of the silver/black color combination here as well. I think it works and makes the BlackBerry Curve 9310 look good on the front. The back however I not a huge fan of.

I think the battery door should have been done differently - either in the same silver of the from bezel or in the same rubber as the sides. The glossy black plastic that is the battery door now stands out too much and also doesn't provide much grip. It almost looks like it came off another device and someone smacked it on the 9310.

The keyboard and "tic tac" buttons are actually very solid as well. There is no rattle in the keys (they don't wiggle in place) and everything actually feels really solid. I wasn't a big fan of the tic tac Send, Menu, Back and End keys either, but on the Curve 9310 I really don't mind them so much. I think they fit in well with the spaced out keys of the Curve rather than something like the Bold 9790 for instance.

The LCD flows right up from the keyboard to the top of the device. It's really sleek and looks awesome. The entire front of the device just has a great flow to it that isn't broken up at all. I dig it. Overall it all feels really solid and well made.

I love how pocketable the 9310 is as well. It's nice and small and easily fits I the hand, pocket or what have you. This is great if you're looking for something small, and being that the 9310 is intended to be a "social" device, it's not expected you'll be watching movies or going browser crazy for any length of time.

This does work against itself at points too, for example people with lager hands like myself may find it hard to type at times. I find that I can't type as quickly as I'd like, but I still do love the split keys of the Curve-style keyboard.

The side convenience and volume keys are well placed. Getting at the center key can be a bit trying, but the volume up/down and both convenience keys are easy to find and get the job done. The left side dedicated BBM key is great but essentially just another convenience key that many users will most likely change. The standby/lock button on top of the device feels solid. It's not loose at all as on some devices, and it feels that it will stand up well. The charging port is well located on the side, and sadly there are no charging contacts on the device which means no charging pod support.

The battery life on the Curve 9310 is one of the best I've had yet. I feel like in standby the battery could last for weeks, and even during normal use, I could stretch it out to nearly three days if I had to. Heavy users will definitely make it through at least a full day if not more.

From first powering on you can see the 9310 is snappy. It's running OS 7.1 out of the box and it runs it well. Navigating around the home screen is quick and responsive and I didn't notice any lag. The default settings for the trackpad had me zipping around, so I dropped them to 50 and it was much easier to scroll. All the standard far of apps are presinstalled. Facebook, Twitter, BlackBerry App World, and BBM. There are also some other apps like Poynt, Hookt, Telenav and BlackBerry Mobile Conferencing.

Native apps include messages, calendar, tasks, contacts, BBM, browser, media and more. Right out of the box, OS 7.1 gives you all the tools you need to get going - even if you choose not to download anything else. Once you activate your email account there really isn't much else you have to do to use the device. You can jump in to Twitter, Facebook and the like should you choose to do so however.

Again, I'm a big fan of OS 7.1 on the 9310. It runs really well and I didn't notice any lag at all really for common activities. The only time it slowed down for me was when I tried update multiple apps in BlackBerry App World at the same time. This pretty much seized up the 9310 and it was useless for a good ten minutes until my downloads were finished. Aside from that, no complaints as far as the OS goes.

The Curve 9310 is marketed as a "social" device for the communicators. It's geared towards those that will want the quick messages, BBM, Twitter and Facebook. Social Feeds will keep everyone in the loop, and pumping out quick tweets or emails on the keyboard is great. Holding the 9310 in hand it just feels like a messaging device. It's hard to explain it until you actually hold it, but it just makes me want to send a Tweet or update my Facebook status. It's almost like I could have the device just to send out status updates to various services and I'd be okay with that.

The Curve 9310 and OS 7.1 really integrate the socail aspects as well. You can send pretty much anything to a social service from the BlackBerry menu no matter where you are on the device, and everything floats into your integrated inbox without even thinking. If you're looking to go social -- this is your ticket.

While you're out and about with the 9310 you won't have to worry about listening to some tunes. While video playback isn't the greatest due to the screen resolution on the Curve 9310, there are plenty of music options to be had. The Curve 9310 is sporing not only a built-in media player, but also an FM radio for listening to your favorite stations on the go. The built-in FM tuner comes with its own app and works like a champ providing you are in an area with a good FM signal. I had a blast going old school and trying out the FM radio. If radio isn't you thing, you can always load up your favorite MP3s and use the native media player or check out one of the many streaming options like Slacker or Pandora in BlackBerry App World.

The camera on the Curve 9310 isn't the greatest, but on this device it gets the job done. The 3.2MP camera on the 9310 will be used by most for snapping quick photos to upload to social sites and for that it works well. Close up shots weren't a winner at all, but taking photos of larger objects or things further away turned out well. There are a few camera settings to tool around with as well so you can better tweak your shots. Overall I don't mind the camera on the 9310 although it could be a bit better in low-light or close-up situations.

Boost has a pretty good deal with their various Pay As You Go options if you're not wanting to be tied down in a contract. You can choose from the BBM Plan, Daily Plans or Monthly Plans.

Let's clarify Boost's "Shrinking Payments" as well. You'll often see Boost market plans that are "as low as $30 a month". This is basically the lowest end of their Shrinking Payment scale. In order to get there however, you need to pay your bill on time for 18 months. Shrinking Payments reduces your total payment by $5/month for every six on-time payments, so it will take you quite a while to get to that point. Once you do however, if you plan on sticking with Boost, you have a pretty good deal.

The BBM plan (aka BlackBerry Messenger Unlimited) will get you unlimited BBM, talk and text for $45/month. With Shrinking Payments you can knock this down to just $30/month. This doesn't include web access however as it's noted that web browsing requires a wifi connection on this plan.

The daily plan is great if you are only using the device for a few days for whatever reason, and will run you $3/day. This plan includes unlimited talk, text, email and web.

Probably your best bet, there are two different monthly plans that Boost offers.

The first is the BlackBerry Monthly Unlimited. This plan includes unlimited text, talk, email, web and BBM for $60/month. Shrinking Payments can get it as low as $45/month.

The second plan is BlackBerry Messenger Unlimited. This is the more social plan of the two and gets you unlimited BBM, talk and text but no web or email. This plan starts at $45/month and can go down to just $30 with shrinking payments.

After you get your Curve 9310 up and running you'll certainly want to grab some accessories to go along with it. At ShopCrackBerry.com we have just what you need - from cases to chargers to batteries and more. We get new items in stock every day, so if you don't see what you want now, just check back later. And with great international shipping options, you can get accessories almost anywhere in the world within a few days.

Overall I really do like the BlackBerry Curve 9310. It's a great social device and the Boost plans are really tough to beat. It makes a great 2nd device for the smartphone hoarder and an awesome entry device for anyone looking to try BlackBerry for the first time. I think the plans, Boost service and the device itself will entice many new users to try it out and many existing users to change over for OS 7.1. If you're looking for a higher-end device, then you'll most certainly want to check out something like the Bold 9900. The Bold 9900 offers a more refined design, much better keyboard and a higher resolution screen. The Curve 9310 is geared toward those looking for an entry-level BlackBerry or the availability of prepaid plans that Boost has to offer.