Here it is CrackBerry Nation.. the long awaited, much anticipated, hands-on video first look at the BlackBerry Curve 8900, formerly known as the Javelin!! My apologies for taking so long to get this up... blame Apple! It's like El Jobso knew what I was working on and sent Gremlins to attack my Mac.

Keep in mind as you watch the video that this is an early, pre-release BlackBerry 8900. The commercially available version, as just appeared on T-Mobile Germany's website, will be slightly different (I make note of the known changes in the video). Regardless, by the time you work through all 8m30s you should have a pretty good feeling for the "New" Curve and how it compares to the "Old" Curve, Bold and even the Storm! The video isn't my best work (so don't judge me too harshly!), but I promise I'll get there one of these days... there are a lot of hands-on videos to be made in the next year that will give me some practice. The fun won't be stopping after the Storm - not when there's cool BlackBerry codenames like Apex, Onyx, Colossal and Jupiter apparently kicking around Waterloo ;)

As for the BlackBerry Curve 8900, be sure to check out our Hands-on BlackBerry Javelin Hardware write up and you can look after the jump for a few more thoughts and images. Enjoy the Show!!!

Safe Mode
During the video I make mention of the ability on OS4.6.1 to boot the device up in Safe Mode but I don't actually show what that looks like (didn't want to wait for the device to have to restart), so here are a couple of screen captures that show it in action: 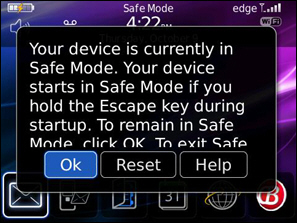 Thoughts on the "Old" Curve
When the Curve 8300 came out I was convinced that RIM had reached a near-perfect balance of what a full-qwerty smartphone should be: small, usable, good looking and packing some punch. I think most people would agree with me that RIM nailed it with the Curve. It's a staple out there today. There are millions of BlackBerry users who absolutely love their 8300, 8310, 8320 or 8330 and for good reason. Nobody I know ever feels "hard done by" for Rock'n a Curve, and if you look at the sales numbers and talk to anybody who sells smartphones for a living and they'll confirm that Curves are still selling like crazy.

Yet once you start using the Bold, and then pick up the Javelin... errr.. Curve 8900, and then try and go back to the Curve 83xx (or any other BlackBerry for that matter), it's TOUGH! The speed of the 8900 and 9000's processors and brilliance of their displays make it hard to use (or want to use) any other BlackBerry. It's going to be interesting to see how RIM positions this device and how the market reacts to it. For the average person the "Old Curve" is still good enough (and has good margin for RIM). But if you're a fan of the 8300 and have the chance to pick up the 8900, you know that's the device you're going to want to get. I could almost see RIM wanting to hold off on rolling out the 8900 to quick (especially in North America), especially considering carriers like AT&T and Rogers are only now getting the 8320. I guess time will tell!

Thoughts on the Bold 9000 vs. 8900 Curve Decision
Get BOTH! Seriously. Don't ask me that question. I don't to even want to think about it. Never mind the Bold vs. 8900 vs. Storm decision. Just give me all three. It really comes down to priorities. Do you need 3G? Then you're getting a Bold. Can cope without 3G and want something a bit smaller? Get the New Curve. Want to experience a touchscreen BlackBerry? Get the Storm.

With this latest generation of BlackBerry smartphones, I don't think you can really make a bad decision (not including the 8220 - though it's new, it's not in the same as class as these three). I love the direction RIM is going in.

Sound Off
That's it from me for now. Be sure to post your reactions and thoughts in the comments!!